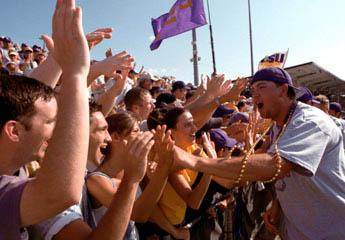 BATON ROUGE, La. — LSU led the nation in baseball attendance for the eighth straight season according to the 2003 attendance rankings released by the NCAA.

The 2004 LSU baseball squad is in its second week of the four-week fall practice period, which features several intra-squad scrimmages in Alex Box Stadium. All scrimmages and practices are open to the public.

The Tigers open the 2004 season Feb. 13 at Central Florida. LSU returns eight starting position players and six pitchers from its 2003 club, which captured the SEC championship and advanced to the College World Series in Omaha, Neb.