Tigers Get Back to Work 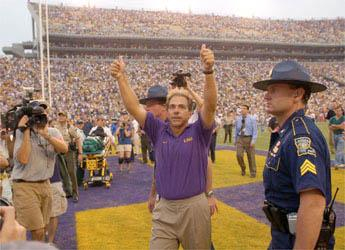 BATON ROUGE — LSU’s sixth-ranked football team went back to work in full pads on Wednesday as the Tigers had a two-hour workout here at the Charles McClendon Practice Facility.

The Tigers will practice again at noon on Thursday and will then take Friday off before another workout on Saturday. LSU will use Saturday’s practice to begin its game plan for the Florida contest, which is scheduled for Oct. 11 in Tiger Stadium. The Tigers enter the first of two open dates this season with a 5-0 overall mark, including a 2-0 Southeastern Conference record. LSU is coming off a 41-6 win over Mississippi State.

“We had a good practice today,” LSU coach Nick Saban said. “We had a tough practice, we did a lot of hitting and we’ll do that again on Thursday.

“We are using this week to try to get some players healed for next week’s game against Florida.”

Among the players sitting out of practice on Wednesday were running back Shyrone Carey (knee), strong safety Jack Hunt (knee), and linebacker Lionel Turner (knee). Saban said he expects Turner back at practice on Saturday and that all three players should return to action for the Florida game.

Defensive end Marquise Hill (ankle) and linebacker Adrian Mayes (wrist) both practiced on Wednesday after sitting out the Mississippi State contest with injuries suffered against Georgia.

“I think the big thing that we want to emphasize during the bye week is we want to improve and do quality-control evaluation of what we have and have not done well and identify those things and try to make improvements in those areas,” Saban said. “We also look at the next three or four opponents that we have down the road. We try to identify some things we haven’t seen and we try to work on that little extra this week so it’s not all new to us when we get ready for that particular game.

“Those are the basic two things that we are trying to do. We want the players to have fun and enjoy practice, which I think they did.”