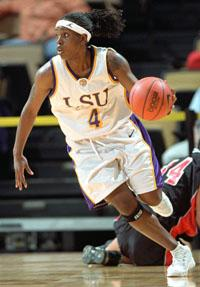 MIAMI — LSU’s third-ranked Lady Tigers, off to the best start to a season since the 1996-97 season, won their fifth game in eight days and captured the FIU/Herald Thanksgiving Classic title with a 68-54 victory over Florida International on Saturday at Golden Panther Arena.

LSU (5-0) jumped out to a 10-0 lead in the first five minutes of the game, but FIU (2-2) chipped back and tied the score at 24-24 with six minutes left in the first half. Lady Tigers then ended the half with an 11-2 run and lead 34-26 at the break. The Golden Panthers cut the lead back to five in the second half, but could not get any closer and never led the game.

“We knew coming down here it was going to be tough competition. FIU is always very good. It was a good opportunity for us and it was what we thought it would be,” LSU head coach Sue Gunter said. “It was a very competitive game. FIU did a nice job of packing it in on us and making us take shots we don’t normally shoot.”

Aiysha Smith led the way for LSU with 13 points and 11 rebounds, while Doneeka Hodges had 14 points, Seimone Augustus added 12 and Temeka Johnson had 11 points and six assists.

Dace Cinite led the Golden Panthers with 12 points despite fouling out with five minutes to play in the game. Ivelina Vrancheva, Mandy Shafer and Cormisha Cotton each had 10 points, while Vrancheva grabbed a team-high 10 rebounds.

LSU’s defense stepped up again in the victory. The Lady Tigers held FIU to 38 percent shooting from the floor and forced 17 turnovers. Doneeka Hodges sparked the defense by holding FIU sharp shooter Shafter to just one of eight from three-point range and four of 13 overall.

“Defensively we did a nice job,” Gunter said. “Doneeka Hodges did a great job on Shafter who is an outstanding player. If you give her a breath she will knock it down from outside.”

The Lady Tigers got a spark offensively off the bench by Ke-Ke Tardy and Wendlyn Jones. Tardy added eight points, including six in the final three minutes, while Jones added four points.

“We had a good effort off our bench. We had some kids that stepped up when we really needed it. I think the game was won with our depth.”

LSU has a week off before hosting Alabama State next on Dec. 7 at 7 p.m. in the Maravich Assembly Center.