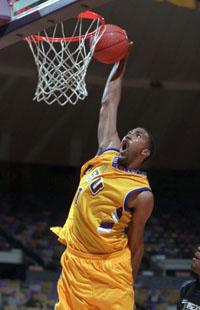 HOUSTON — The LSU Tigers made a last minute rally almost pay off before falling to the Texas A&M Aggies, 79-77, in the first game of the Space City Hoops Classic in the first college basketball game to be played in the Reliant Center here Saturday.

LSU falls to 2-1 on the young season going into a Tuesday match up with Delaware State at 7 p.m. at the Maravich Assembly Center. Tickets for that game and all home games go on sale Monday at 8 a.m. at the LSU Athletic Ticket Office. The new Pick 5 ticket promotion also goes on sale at that time.

LSU had five players in double figures with Collis Temple III leading the way with 19 points. Ronald Dupree had 12 and Torris Bright, Jaime Lloreda and Darrel Mitchell each had 11. Bernard King and Antoine Wright were the big guns for A&M with King getting 26 and Wright 22. Leandro Garcia-Morales added 10.

Mitchell threw in a three with 36 seconds to play and LSU, out of time outs, fouled Garcia-Morales, who made one toss to make it 79-74. The Tigers came down and Antonio Hudson threw in a trey with 18 seconds left to cut it to 79-77. Garcia-Morales threw away the inbounds pass giving LSU one final shot.

Hudson missed a two pointer with 13 seconds to play, Mitchell got the offensive board, Torris Bright then missed a trey and Hudson got the rebound to Bright who was fouled by Bernard King with three second to play by King.

After an A&M timeout, Bright missed the first half of a one-and-one and A&M got the ball threw it up in the air and the time ran out giving the Aggies the win.

“We’re not a very good team right now,” said LSU coach John Brady. “We couldn’t make timely free throws and we couldn’t execute offensively. I’m looking for more consistent production from some of the players I expect it from. Overall, we could have played better defense, but (Wright and King) made some great shots over us. Our second half defense was good enough to win but we fouled too much. We left three points on the table in the last three minutes (on front ends of one and ones). But we just didn’t make enough plays down the stretch.”

The game was an up and down affair at times as both teams shot the long range shot particularly well. Both teams allowed open looks at the trey and the two teams combined to hit 24 of 45 shots from beyond the arc. The Tigers would for the sixth time since the shot was introduced hit 13 treys to equal the school record.

“We know we have to get better as a team,” said Temple. “We have to go back to work and get something done. We’re looking for more of a team concept. We just need to let the game come to us because we’re putting to much pressure on ourselves. Coach told us we need to have fun and play as a team out there. We know that, but we need to have better expectations of ourselves.

“When you play teams of this caliber this early in the season, it teaches you about your team,” said A&M Coach Melvin Watkins. “This team definitely has potential. A win like this will help us gain some confidence and we’ll see if we can sustain that through the Big 12. We got a little careless in the second half but we toughened up down the stretch. We’ll surely get better from this.”