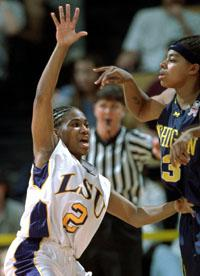 Eleven Lady Tigers (4-0) scored and nine had at least six points in the victory. DeTrina White led the way with 14 points on seven of 11 shooting from the floor. Seimone Augustus added 12 points, while Miami native Patty Hanten hit for nine and Temeka Johnson had nine points and a game-high nine rebounds.

“I felt like we got outworked in the first half. You have to give credit to Washington State,” LSU head coach Sue Gunter said. “I told our team after the game that we are going to have to get used to the fact that everybody we play is going to come at us like WSU did. We were a little out of sync, but at the end of the half and the beginning of the second half we kind of got it together again. We got some really good play out of a lot of people.”

The Lady Tigers then scored 10 of the first 12 points of the second half and pull away for good, leading by as many 41 late in the game.

LSU shot 60.3 percent from the floor in the game, including 62.5 percent in the second. WSU connected on 44.4 percent of their shots, but only managed to shot 38 percent in the final 20 minutes. The Cougars outrebounded LSU 29-24 and were led by Candace Fields with 10 points and a game-high 12 rebounds. White led the Lady Tigers on the boards with five.

LSU will play host FIU, who defeated Virginia Tech 79-68 in the first game to advance to the title game, on Saturday at 4 p.m. CST in Golden Panther Arena.