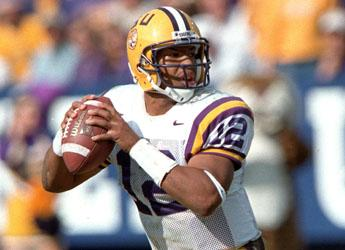 LITTLE ROCK, Ark. — Arkansas quarterback Matt Jones connected on passes of 50 and 31 yards in the a span of 25 seconds to advance 81 yards down the field and score the game-winning touchdown with nine seconds remaining and win the Southeastern Conference Western Division Championship, 21-20, on Friday afternoon in War Memorial Stadium.

LSU (8-4, 5-3 SEC) and Arkansas (9-3, 5-3 SEC) will both tie with Auburn for the Western Division title, however, the Razorbacks will advance to the Championship game with a pair of head-to-head wins.

LSU now awaits a bowl bid, which is expected on Dec. 8.

Jones, who had completed only two passes prior to the final three-play drive, found Richard Smith for 50 yards to the LSU 31 with 34 seconds remaining, threw incomplete into the endzone and then found DeCori Birmingham in the back corner of the endzone for a 31-yard touchdown to tie the game. After a celebration penalty backed the Razorbacks to a 35-yard point after attempt, placekicker David Carlton won the game by splitting the uprights with nine seconds on the clock.

LSU was only able to run one play, which was unsuccessful.

The Tigers finished the game with 150 yards rushing on 43 carries, while the run-oriented Hogs ran 48 times for 245 yards and two touchdowns. Arkansas was led by Fred Talley, who carried a game-high 15 times for 118 yards including a 56-yard tackle-breaking touchdown run late in the fourth quarter.

Jones ran the ball 11 times for 35 yards, while completing only 4-of-16 passes for 127 yards, one touchdown and one interception. Fullback Mark Pierce added 41 yards on seven carries.

LSU starting quarterback Marcus Randall had a solid outing, completing 14-of-25 passes for 203 yards and a touchdown. He also rushed 10 times for 26 net yards and his second career touchdown.

Domanick Davis led the ground attack for the Tigers, rushing 14 times for 67 yards before suffering a knee injury that forced him to take a back seat to LaBrandon Toefield. Toefield also ran 14 times for 28 net yards.

Highlighting the afternoon for the Tigers was true freshman wide receiver Skyler Green, who took the place of an injured Devery Henderson. Green caught three passes for 92 yards including a 67-yard touchdown sprint that put LSU ahead 7-0. He also ran the ball twice for 17 yards. Michael Clayton had a game-high seven catches for 89 yards.

The Tigers won the toss and elected to defer to the second half.

Arkansas ran the ball on eight of nine plays to open the game, gaining a pair of third down conversions to the LSU 47-yard line before being forced to punt.

Pinned at its 14-yard line after a 34-yard Arkansas punt, Randall used back-to-back passes to Michael Clayton to gain a first down and get some breathing room at the LSU 25.

After a 9-yard catch by Shyrone Carey and a 4-yard run by Davis, Randall hooked up with Green cutting back to the middle of the field for what looked to be just a first down. However, the true freshman receiver from Westwego, La., split two Razorback defensive backs 20 yards past the line of scrimmage and sprinted to the endzone for his first career touchdown on his second career catch.

Again, Arkansas was able to run the ball well enough to get to midfield. However, this time the drive was stalled at midfield. Although the Tigers benefited from an offsides penalty for a first down when forced to punt from its 31, the Tigers only advanced nine more yards before punting.

A 52-yard punt by Donnie Jones gave Arkansas the ball at its 25 to start what would be a 17-play, 66-yard drive that lasted 8:10. The Hogs rushed 14 times to the LSU 9 before Jones was faced with a third down. He was forced out of the pocket and to the right sideline where he was then able to get a pass off in the direction of the endzone.

LSU cornerback Corey Webster stepped in front of the receiver and caught his SEC-leading seventh interception of the season to end the threat and give the Tigers possession on their 20.

The teams exchanged punts and LSU took over with 3:18 remaining in the half. Randall came up with a key third-down conversion deep in Tiger territory to the LSU 24 on an 8-yard pass to Clayton. Three-straight first downs on 8- and 12-yard runs by Davis and a 9-yard catch by Green moved the Tigers into Arkansas’ side of the field with under a minute to play.

After a penalty by each side, Randall again connected with Green on the same play that led to a 67-yard score in the first quarter. This time, Green was caught up with at the 32 and fumbled after being tackled. The Tigers recovered the fumble and set up a 49-yard field goal attempt by John Corbello into a stiff wind.

Corbello converted his seventh field goal of more than 40 yards this season to give LSU a 10-0 lead as time expired in the first half.

Arkansas stopped the Tigers on three plays to open the second half and were able to points on the board right away.

Aided by two penalties by the Tigers, the Razorbacks had excellent field position at its 49-yard line. After one rush, Jones connected with George Wilson who was cutting toward the middle of the field for a 35-yard reception. Six rushes later, fullback Mark Pierce dived over the goal line for a 1-yard fourth-down touchdown to cut the lead to 10-7 with 5:34 to play in the third quarter.

LSU responded on its next possession, starting on its 11-yard line and rushing three straight times to the 40. On first down, Clayton outjumped a Razorback receiver at the Arkansas 12-yard line to haul in a 48-yard catch. Three plays later, Randall ran in from 5 yards out for his second career rushing touchdown and a 17-7 lead.

The Tigers were able to get the ball into Arkansas territory once again, but Toefield fumbled at the Arkansas 45, LSU’s first turnover of the game. However, Arkansas was only able to gain three yards before punting yet again.

Three more punts in a row followed, giving Arkansas the ball at its 20 with 7:57 remaining in the game.

While the LSU offense sputtered in the fourth quarter, Arkansas was able to get out of a second-and-20 situation at its 43-yard line to get a 57-yard touchdown run from Talley with 6:33 to play.

As the clock ran under three minutes, LSU was able to work its way deep into Arkansas territory at the 32 on a 9-yard third-down catch by Clayton. Faced with another third down and 4, Randall faked the end-around to Green and ran for 9 yards to the Arkansas 17. Arkansas spent its second and third timeouts before the Tigers were faced with a fourth-and-5 from the Arkansas 12.

The Tigers elected to attempt a 30-yard field goal with 43 seconds remaining, and Corbello made his 15th of the season to give LSU a 20-14 lead with 40 seconds on the clock.

After a 17-yard run back, Jones connected with Smith at the LSU 31 for a 50-yard reception. Two plays later, Jones hit Birmingham in the right corner of the endzone for a 31-yard touchdown to tie the game at 20-20. After a celebration penalty forced a 35-yard points after attempt, Arkansas converted to take the 21-20 lead.