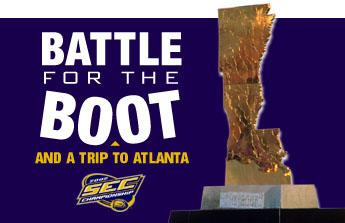 LITTLE ROCK, Ark. — In a game that will decide the Southeastern Conference Western Division’s representative in this season’s championship game, the defending conference champion LSU Tigers take on Arkansas at 1:30 p.m. on Friday in a nationally televised contest on CBS.

Live streaming audio from the LSU Sports Network broadcast can be heard live beginning with the pregame show at noon CST. Listen to “The Voice of the Tigers” Jim Hawthorne, along with guest color analyst Verge Ausberry, sideline reporter Jordy Hultberg and studio host Kevin Ford by clicking on the “Audio” link beneath “Upcoming Events” on the homepage of LSUsports.net. Or, use the broadcast schedule to find a link to the broadcast.

LSU is coming off a thrilling 14-13 victory over Ole Miss in Tiger Stadium last weekend, while Arkansas has won five straight games against teams whose combined record is now 20-38.

Should the Tigers win, they will face SEC Eastern Division Champion Georgia on Dec. 7 in the SEC Championship game in Atlanta’s Georgia Dome. Should the Tigers lose, there would be a three-way tie for the SEC Western Division title, giving Arkansas the head-to-head tiebreaker with LSU and Auburn and sending the Razorbacks to Atlanta for the championship.

A loss would also put LSU third after tiebreakers in the West due to a 31-7 loss to Auburn earlier this season. LSU would then go into the SEC bowl mix, with Cotton or Peach Bowls the most likely.