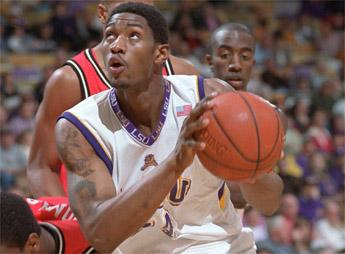 HOUSTON — The LSU men’s basketball leaves the friendly confines of the Pete Maravich Assembly Center to play a basketball game in the NFL’s newest retractable roof stadium at the Houston Texans’ Reliant Stadium as the Tigers take on Texas A&M in the first game Saturday of the Space City Hoops Classic.

The LSU-Texas A&M game at 1:30 p.m. is the first of three in what Houston folks is a test run of the 69,500 seat facility, scaled down for Saturday’s event, as a possible host site for a future NCAA Final Four. Following the first game, Texas will play Seton Hall and in the nightcap, Houston takes on Baylor.

The LSU-Texas A&M game will be televised regionally on the Lone Star Series regional network with three Louisiana markets picking up the telecast (Baton Rouge — WGMB Ch. 44; Shreveport — KMSS, Ch. 33; and, Lafayette — KADN, Ch. 5). As the norm, the game will be broadcast on radio on the LSU Sports Network (Eagle 98.1 FM in Baton Rouge) and on the Internet at www.LSUsports.net.

LSU is 2-0 on the young season coming off a wins over Nicholls State (68-24) and South Alabama (71-62) to win the championship of the Hispanic College Funds Classic at the Maravich Assembly Center last week. Texas A&M is 1-1, coming off a Tuesday night 78-72 loss at Miami (Fla.) after failing to score in the last 1:32 of the game after having a 72-71 lead.

This will be the first meeting between Texas A&M and LSU since the 1983 season and ironically, that game was also played in Houston, at The Summit. This game in Reliant Stadium will mark the fifth “domed-type” football facility that LSU has played basketball in, including the Carrier Dome in Syracuse, Minneapolis’ Metrodome, the Louisiana Superdome in New Orleans and the Georgia Dome in Atlanta.

Reliant Stadium will have the basketball court set up in one end zone much like the Georgia Dome and there will be a big Fan Festival going on in the other end of the stadium floor.

LSU will probably start its normal lineup of guard Torris Bright and Collis Temple III at guards, along with Brad Bridgewater, Ronald Dupree and Jaime Lloreda at the forward positions. Lloreda is coming off an MVP performance of 17 points and 10 rebounds in the championship game of the Hispanic Classic.

A&M is in the fifth year of a rebuilding process under coach Melvin Watkins, who came to College Station after a long and successful tenure at UNC-Charlotte. Watkins was a member of the 1977 NCAA Final Four team at UNCC and then served 18 years as an assistant coach at the Charlotte school before being named head coach. LSU Associate Coach Butch Pierre joined Watkins for his first year as head coach at UNCC before joining the LSU staff when John Brady was named head coach in 1997.

There are three players on the A&M roster who have had substantial playing time in the last couple of years from Louisiana. Senior guard Bernard King has started 80 games prior to this year, while junior forward Nick Anderson has 54 starts entering the year, while Andy Slocum has 28 times to be in the starting five.

After the A&M game in Houston, the Tigers return home for six straight games prior to Christmas in the Maravich Assembly Center: Dec. 3 Delaware State; Dec. 7 McNeese State; Dec. 14 Texas A&M-Corpus Christi; Dec. 17 Prairie View and Dec. 21 Arizona. Tickets for all those games and the rest of the 2002-03 schedule go on sale Monday at the LSU Athletic Ticket Office.