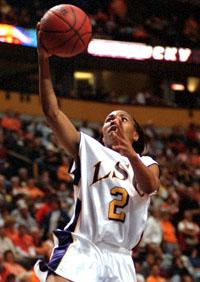 MIAMI, Fla. — LSU’s third-ranked women’s basketball team is on the road again, this time for the FIU/Herald Thanksgiving Classic hosted by Florida International on Friday and Saturday. LSU will play Washington State at 6 p.m. CST on Friday, while FIU will host Virginia Tech at 4 p.m. CST to open the tournament.

The Lady Tigers (3-0) are looking to remain perfect on the season. They have defeated Arizona and Southeastern Louisiana on the road and Florida Atlantic at home.

Washington State (0-2) is looking for its first victory of the season. The Cougars have lost to Wyoming and home and at Montana State.

“We don’t know a great deal about Washington State,” LSU head coach Sue Gunter said. “What we have seen of them, we know they will be competitive. We have had two good practices and are looking forward to playing.”

Freshman Seimone Augustus leads LSU into the two-day tournament. The 6-1 guard has led the Lady Tigers in scoring in each of the first three games and is averaging 22.7 points per game. Junior guard Temeka Johnson has also started the season in good fashion, averaging 10.0 points and 8.0 rebounds per contests.

Junior forward Bianca McCall leads WSU with 12.5 points and 14.5 rebounds per games, including pulling down 19 rebounds in the team’s loss at Montana State.

“This is a good field,” Gunter added. “Who ever we play on Saturday will be very good competition for us. Florida International is a very good team playing on their home floor and Virginia Tech has had some talented teams over the past few years.”

After the tournament, LSU takes a week off before hosting Alabama State in the Maravich Assembly Center on Dec. 7, at 7 p.m. CST.