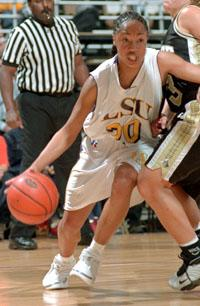 BATON ROUGE — Lady Tigers freshman Seimone Augustus made nine of her first 10 shots from the field and finished with 24 points, as the third-ranked LSU women’s basketball team won its home opener over the defending Atlantic Sun

Conference Champions, the Florida Atlantic Lady Owls, 88-55, in front of 1,637 fans on Monday night in the Maravich Assembly Center.

The Lady Tigers (3-0), who played their third game in four days in three different cities, shot 59 percent from the field (36 of 61) and opened each half with a dominating performance to breeze past the Lady Owls. All 13 Lady Tigers scored and played at least five minutes.

Augustus, finished 10 of 12 from the field, had five rebounds, three assists and two blocked shots. The prep standout also made all four of her free throws and improved her field goal percentage to 76.9 on the season (30 of 39).

“Seimone just does not make a lot of mistakes,” LSU head coach Sue Gunter said. “Her shot selection is outstanding and she does not try to force things.”

Not to be overshadowed by the 2002 National High School Player of the Year, Lady Tigers All-America point guard Temeka Johnson had 14 points and 10 assists, while DeTrina White added nine points, eight rebounds and three blocks in 21 minutes. LSU guard Kisha James started and added nine points with seven assists, while Wendlyn Jones came off the bench to score 10 points.

“We looked better as a team tonight,” Gunter added. “I think that’s the thing that we look forward to with this team is getting better with each game.”

FAU (0-3) was limited to 19 of 59 from the field, including only 7-of-34 in the second half. The Lady Owls were led by Tamica Pierce with 16 points, and Shontavia Williams contributed a double double with 10 points and 10 rebounds.

LSU scored 37 points off 25 FAU turnovers, but struggled with turnovers of its own at times and finished with 18.

After falling behind in its first two contests on the road to start the season, LSU was on the mark in the first four minutes, taking an 11-0 lead before the Lady Owls scored with 16:15 to play in the half. Led by Augustus’ eight points on 4-of-4 shooting, the Lady Tigers started the game 9-of-11 from the field and led 21-7 six minutes into the game.

FAU made its first two three-pointers to stay with Southeastern Conference powerhouse in the first 10 minutes, trailing 24-15 and shooting 55 percent from the field with eight turnovers against full-court Lady Tigers’ pressure.

Behind six more points by Augustus, LSU attacked the FAU zone from the perimeter to built a 16-point lead, 36-20, with five minutes to play in the first half.

A steal at mid-court by Kisha James followed by a behind-the-back dribble to her left hand led to a one-on-three fast-break layup to highlight an 8-0 run that pushed LSU up by 22, 44-22, with just less that three minutes on the first-half clock.

FAU answered with the final seven points of the half to cut the Lady Tigers’ lead to 46-29 at the break.

A pair of unanswered baskets in transition by Augustus and Johnson to start the second half forced FAU coach Chancellor Dugan to take a timeout only 98 seconds into the period. The four points started a 13-2 run to open the half that was capped by Augustus’ 18th point on a 12-foot baseline jumper.

FAU didn’t help its own cause, making only 2-of-25 shots in the first 13 minutes of the half and turning the ball over seven times. Seven straight free throws without a miss were the only saving grace for the Lady Owls.

Against four Lady Tigers reserves including center Tillie Willis, forward Treynell Clavelle and guards Florence Williams and Patty Hanten, the Lady Owls were able to get no closer that 32 over the final four minutes of the contest.

The Lady Tigers return to action against Washington State in the first game of the four-team Florida International Thanksgiving Classic on Friday, Nov. 29, at 6 p.m. CST. LSU will then face either host FIU or Virginia Tech in the championship or consolation game on Saturday at 4 or 6 p.m.