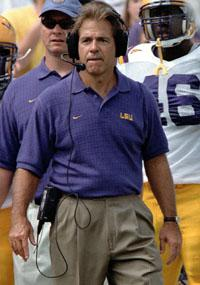 “As I said after the game, it was a great atmosphere to play in Saturday night in Tiger Stadium and it was a great environment for our team, especially for our seniors. A lot of guys have given a lot to this institution for three years and I am hopeful that is something that does not go unacknowledged. There are a lot of good football players playing their last game this week in the regular season and certainly their last game in Tiger Stadium was a special moment for them all. I was really proud of the way our team bounced back and competed in the game. I think we really played hard and overcame a lot. We gave some opportunities away and made a lot of mistakes in the game that are certainly correctable. As the season has been, which has been a season of overcoming adversity, which now losing Devery Henderson is another obstacle that we will certainly have to overcome. I think that game was the same kind of game for us and I think the whole message of re-creating the identity of being a relentless competitor was what I was probably most proud of the way our team responded in the game.”

“When it came to it in crunch time we made the plays we had to make and scored when we needed to score. (Quarterback) Marcus (Randall) did a great job of coming off the bench. It looked like to me that he was a lot more relaxed in that situation. I know someone is going to want to ask me if I am going to do it that way again but I will tell you right now that we have not decided what we are going to do relative to that. I have not really talked to either Marcus or Rick (Clausen) about that. Marcus played with a lot of confidence in the game and had a lot of poise. He made good decisions and played with a lot of confidence and I am sure the fact that he is player of the week this week is something that will help him be even more confident. I think that this week everybody is going to want to talk about winning the West but really the number one focus is that we have to beat Arkansas. They are a good football team and they have won five games in a row and they are playing as well as they have all year similar to the situation last year. They had a winning streak going then and they played well down the stretch and they are playing extremely well on defense right now and are scoring a lot of points on offense. They are also playing well on special teams and just have a really good football team.”

“I know they traditionally play well in Little Rock. There are a lot of obstacles that we need to overcome to be able to win a game on the road of this magnitude. It is not about winning the West, it is not about any of that stuff, it’s about what we need to do to beat Arkansas. That is what our players need to focus on and if they focus on that, then that’s what will give us the best opportunity to do it.

I do not really have any other injuries to report. We will have a couple of guys in red shirts today but no one that we think will be out for the game. (Wide receiver) Devery (Henderson) had surgery yesterday. It was a pretty bad injury relative to the kind of break that he had, both bones, but I do think he will be ready to play any football until spring practice. (Safety) Travis Moses is still very questionable as to whether he will be able to come back this week with the scope he had on his knee.”

On Arkansas leading the nation in turnover ratio….

“Well I think it is important in every game because I always talk about big plays and turnovers. Their quarterback Matt Jones has had an ability to make big plays in almost every game when they have need them. Their defense and special teams have done a fantastic job of creating and getting turnovers and they way they play offense they do not give the ball up much. They are a run-first team and use the play action pass, they run some options. But if you play them too tight they have the ability to hit big plays on you whether it is double-patterns, trick plays, throw back roll-outs or whatever it is. They have been hard to take the ball way from and they gave been very opportunistic on defense and special teams in getting the ball back. I think turnovers and big plays are the biggest factor of outcomes of games, so we cannot give them any opportunities. It is going to be really important that we do not turn the ball over and if we create turnovers then that will be an advantage for us in the game.”

On the play of Michael Clayton this season….

“I think he has played outstanding and he played outstanding in this game. He was one of our players of the week, not just for the passes that he caught, but for the blocking that he did and how physical he was in the game and for the toughness that he showed. I think people tend to look at receivers and say well if the guy does not catch a ton of balls and is not leading the conference in catches per game then he is not having a good year, but that is not at all true when it comes to Michael Clayton. He has done the role that we have needed him to do on this team as well as any receiver that we have and he has done it without complaining once. He is always trying to do what is most helpful to this team.”

“They are still turnovers. They still got them and we still fumbled it. If we do not carry the ball right then we are going to fumble. If we throw it to their guys then they will probably catch it. We coach the guys how to carry the ball and we can coach them how to take hand offs and we are going to continue to do that and continue to support them. The kind of offense we are right now we can ill afford to make mistakes and there is not thing our team needs to do well is to play smart. When you play smart you do not turn the ball over, not that any one carries the ball thinking that they are going to fumble, but you can carry it thinking what is the most fundamental way to carry it. I think that gives you the best opportunity to not make a mistake. To eliminate mental errors and to eliminate turnovers on both sides of the ball I think is only going to help us execute better.”