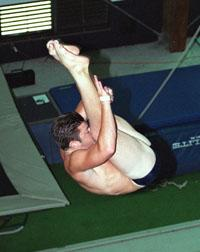 MINNEAPOLIS, Minn. — The LSU diving team finished up a successful trip to the Minnesota Swimming and Diving Invitational on Sunday, with the men finishing in 12th place with 34 points and the women in 14th with 21 points.

The host University of Minnesota won the meet on both the men’s and women’s side as the men finished with a total of 1,126.50 and the women totaled 696 points.

The divers were competing in Minnesota this weekend to complete the meet with Auburn which was scheduled earlier in the season. LSU and Auburn were originally scheduled to compete against each other on Oct. 5 in Baton Rouge to open the season, but Hurricane Lili forced the meet to be rescheduled. The teams did not have another date where each was off, so they were forced to hold a “phone” meet on Oct. 25. Each team swam the meet at their respective pools and then results of the swimming events were compiled and called in for comparison. The only thing which inhibited the final score of the meet from being released was the diving portion because it was not possible for diving to be scored over the phone. Auburn also competed at the meet this weekend so that final results of the LSU-Auburn meet can be released early next week.

Auburn had at least one athlete make the finals of each diving event during the weekend, including two in the men’s 1-meter and had the third and fourth place finishers in the men’s platform competition. Matt Bricker and Caesar Garcia finished third and fourth in the finals of both the 3-meter and the 1-meter. Garcia finished third in the platform while Bricker placed fourth.

Highlights from Day One of the Rocky Mountain Invitational

Highlights from Day One of the Rocky Mountain Invitational