LSU Empties Bench in Win Over SLU; Takes on FAU at Home 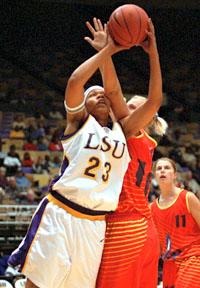 “We asked the players in the locker room at halftime to make a commitment defensively,” LSU head coach Sue Gunter said. “We felt like if we could do it defensively it would carry over to the offense. But give some credit to Southeastern. They shoot the three extremely well. We were defending the heck out of them, but the shots were still falling.”

LSU’s defense forced 22 turnovers and held the Lady Lions to 36.2 percent shooting from the floor, including just 29.6 percent in the second half.

The first half was a different story. LSU did jump out to an early 18-8 lead, but SLU used a 7-2 run to get back into it and pulled even at 28-28 before the Lady Tigers finished the half on 8-2 run.

All 13 players played for LSU and 12 scored at least two points. Freshman Seimone Augustus led the way with 17 points on eight of 10 shooting, while DeTina White and Temeka Johnson each added 12 points. Ke-Ke Tardy and Roneeka Hodges each scored 10 points off the bench and Wendlyn Jones had six points and a game-high eight rebounds off the bench as well.

The Lady Tigers shot 56.5 percent from the floor, including hitting 24 of 38 (63.2 percent) shots in the second half. LSU outrebounded SLU 43-26 with all 13 players grabbing at least one board and the Lady Tigers dished out 28 assists and collected 10 blocks in the game.

LSU is back in action Monday when they host Florida Atlantic in the home opener at the Maravich Assembly Center at 7 p.m. CST. It will be the third game in four days for the Lady Tigers.