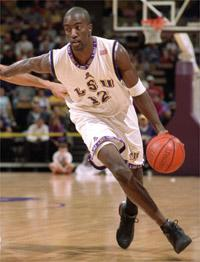 BATON ROUGE — LSU, off its best performance of the young season after somewhat disappointing exhibition performances will play Sunday at 4:30 p.m. in the Maravich Assembly Center for the Hispanic College Funds Classic championship.

The Tigers downed Nicholls State, 68-24, as LSU held the Colonels to the lowest opponent total against an LSU team since 1946. Further review showed that it was the seventh lowest total allowed by an SEC team since 1984.

South Alabama was an 82-61 winner over Southern University in the opener of the first round doubleheader Friday. Four players were in double figures for John Pelphrey, in his first game as a head coach at USA, with Malerick Bedden leading the team with 16 points, while Henry Williams added 13 (10 rebounds), Demetrice Williams 12, Benjamin Sormonte 11 and Marques Ivy 10.

There will be no television for the championship game, but the game will be broadcast on the LSU Sports Network (Eagle 98.1 FM in Baton Rouge) and on the Internet at www.LSUsports.net.

Against Nicholls State, the Tigers only had one player in double figures, Shawnson Johnson, who doubled up in his first game at LSU with 10 points and 13 rebounds to go with six blocks and three steals in 21 minutes off the bench. Brad Bridgewater and Tony Gipson had nine points, while Torris Bright, Collis Temple and Darrel Mitchell had eight points. It was the first time that LSU had won with only one player in double figures since 1998.

LSU, in building a 44-12 halftime advantage, his six-of 12 three pointers and 54.8 percent for the half. The offense cooled in the second half, but the Tigers kept the defensive pressure on to make LSU Coach John Brady, 6-0, in season openers.

The Tigers out rebounded the Colonels, 52-24.