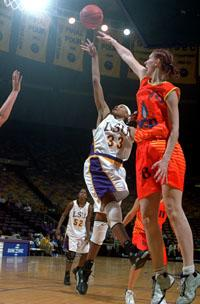 TUCSON, Ariz. — Freshman Seimone Augustus poured in 27 points, including six in the overtime period to lead the third-ranked LSU Lady Tigers basketball team to a 78-71 overtime victory over Arizona on Friday night in UA’s McKale Center.

The score at the end of regular was 65-65 after Arizona held LSU scoreless over the final three minutes of regulation and the Wildcats overcame a five-point LSU lead over the last nine minutes of the game.

“Number one lets give Arizona a lot of credit,” LSU head coach Sue Gunter said. “They are a very good team with some very good players, but I think we still need to work on a lot of things. It is our first game and we are lucky to come out with a victory.”

LSU held a 38-32 lead at halftime after three lead changes in the first half. Arizona retook the lead in the second half with 15:31 remaining when Aimee Grzyb hit a jumper to give the Wildcats a 47-46 lead. The lead then changed hands three more times in the second half before Grzyb missed a lay-up with four seconds to play in regular to send the game to overtime.

Freshman Shauntinice Polk led Arizona with a game-high 29 points and 11 rebounds in her collegiate debut. Dee-Dee Wheeler had 14 points and Krista Allen added 11 points and 10 rebounds.

LSU shot 44.6 percent from the floor in the game, including hitting five of seven shots in overtime, while Arizona hit 50 percent of their shots.

The Lady Tigers outrebounded the Wildcats 41-35 and forced 22 turnovers in the game.

LSU returns to Louisiana to face Southeastern Louisiana in Hammond on Sunday at 2 p.m. before hosting Florida Atlantic on Monday at 7 p.m. in the Pete Maravich Assembly Center.