Volleyball Season Ends in 3-1 Loss to Georgia at SEC's 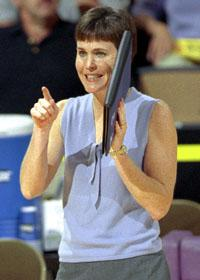 FAYETTEVILLE, Ark. — After losing Kyra Lancon midway though the first game, the fourth-seeded LSU volleyball team could not fight back and fell to fifth-seeded Georgia, 30-22, 30-24, 24-30, 30-18 in the first round of the Southeastern Conference Tournament on Friday night in Barnhill Arena.

Midway through the first game Lancon went down with an ankle injury for the Tigers and did not return for the match. When she left, she was leading the team with four kills and a .375 hitting percentage.

“We fought as hard as we could fight after Kyra went down,” said LSU head coach Fran Flory. “Kyra has been our most consistent player offensively and the player we have been going to the most. They just had Jennifer Hampton’s number, but I thought Regan Hood came through for us and Cara Causey did a good job after we tried to get Lauren Cuyler in there in the beginning. I am proud of our effort but there was just too much for us to overcome tonight.”

Hampton led the Tigers with 14 digs for her 17th double-double of the season. Vogt and Rachel Pittman each recorded in double-figures with 10 digs.

With the scored tied at 10 in the first game, a pair of blocks and a service ace keyed a 6-0 run by Georgia that broke the game open. LSU could get no closer than six points the rest of the way as the Bulldogs went on to take the first game, 30-22.

Georgia used an early four-point run to break a 3-3 tie and take the lead for good in the second game.  The Bulldogs extended the lead to 14-8, before LSU cut the deficit to four, the closest the Tigers would get the remainder of the game. Georgia led by as many as seven before closing out the game, 30-24.

LSU came out in the third game and took charge. The Tigers used a 7-3 run to break a 3-3 tie and take a four-point lead. After Georgia cut the LSU lead to two points, the Tigers broke it open, stretching the lead to seven points, 20-13.

The LSU defense keyed the Tigers as they recorded 23 digs and four blocks in the game. LSU went on to close out the game, 30-24.

The scored remained close in the fourth game until a 7-0 run by Georgia extended the 15-12 Bulldogs lead to 22-12, breaking the game open. LSU could get no closer than nine points the rest of the way as Georgia went on to close out the game and the match, 30-18.