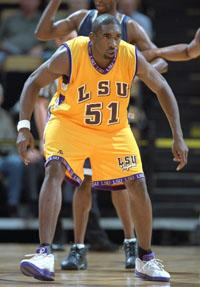 BATON ROUGE — In the nightcap of the 2002 Hispanic College Fund Classic held in the Maravich Assembly Center, the LSU men’s basketball held Nicholls State to the fewest points by a Tigers opponent in 56 years and won, 68-24, on Friday evening.

The Tigers (1-0) improved to 6-0 under head coach John Brady in season openers, while Nicholls State head coach Ricky Blanton lost his bid to beat his alma mater in his coaching debut. Nicholls State fell to 0-1 and will take on Southern, an 82-61 loser in the opening game, in the consolation game of the classic.

Although neither team shot well in the second half, LSU finished at 46.7 percent for the game (27 of 58). Nicholls State, which scored 12 points in each half, was held to only 10 field goals on the evening, shooting 20.8 percent including 5-of-27 in the second half.

Only one Tiger scored double figures — Shawnson Johnson with 10 points — however nine players scored and all 15 who dressed played in the contest. Brad Bridgewater and freshman guard Tony Gipson had nine each, while Darrel Mitchell, Torris Bright and Collis Temple III each had eight. Johnson led LSU with 13 rebounds and six blocked shots, as LSU tallied nine on the evening.

Nicholls State was led by Anthony Wilcher who had seven points and four rebounds.

Each team was plagued by turnovers at times, as the Colonels committed 20 which led to 24 Tigers points. LSU finished the game with 16 turnovers

Bolstered by its man-to-man defense and the long-range shooting of Darrel Mitchell, the Tigers went on a 15-0 run from the 15:40 mark until NSU’s Dominique Geason hit a jumper with 9:37 to play in the first half to cut the LSU lead to 22-8.

A pair of free throws by Mitchell, the 2002 Mr. Basketball in Louisiana who came off the bench spell Jaime Lloreda, and a trey from Temple increased the LSU lead to 27-8 at the eight-minute media timeout.

Reserve guard Tony Gipson scored a trio of baskets and Bright added pair of baskets including LSU’s seventh three-pointer of the evening to put the Tigers up by 28, 40-12.

Just as they did in the first half, the Tigers came out of the blocks slowly, shooting poorly from the field and running their offense inefficiently. However, a dunk by Brad Bridgewater with 13:48 to play in the game capped an 8-2 run by the Tigers and moved the lead to 55-16.

After Nicholls came back with four-straight points, Johnson took a pass from Mitchell for a fast-break dunk and Bridgewater converted a three-point play for a 62-20 lead with 9:34 remaining.

Neither team shot well down the stretch, combining to score only nine points in the final 9:35 of the contest.

In the first game of the evening, South Alabama (1-0) advanced to the final of the four-team tournament which has been won by St. Bonaventure in 2000 and West Virginia in 2001. The host school has yet to win the classic, as both Fresno State and New Mexico were defeated on their home courts in the past two years. Southern and 32nd-year head coach Ben Jobe lost its opener and fell to 0-1.

First round winners LSU and South Alabama will meet in the tournament final on Sunday at 4:30 p.m., while Southern and Nicholls State will play in the consolation at 2 p.m.

BATON ROUGE — In John Pelphrey’s head coaching debut, the South Alabama Jaguars used an 11-1 first-half run to build a double-digit lead against the Southern University Jaguars before running away with a 82-61 victory in the first game of the third-annual Hispanic College Fund Classic held at the Pete Maravich Assembly Center on Friday evening.

South Alabama (1-0) advanced to the final of the four-team tournament which has been won by St. Bonaventure in 2000 and West Virginia in 2001. The host school has yet to win the classic, as both Fresno State and New Mexico were defeated on their home courts in the past two years. Southern and 32nd-year head coach Ben Jobe lost its opener and fell to 0-1.

“I thought that our basketball team tonight played extremely hard,” Pelphrey said. “We put a big focus on that coming into the game. We wanted to defend, we wanted to rebound and we felt that if we could do those things that we would put ourselves in a situation where we would have a chance to win.”

Five South Alabama players scored in double figures, led by reserve Malerick Bedden who had 16. Fellow reserve Benjamin Sormonte and Henry Williams added 13 each, while Demetrice Williams had 13 point and 10 rebounds. Marques Ivy rounded out the five with 10 points in 20 minutes.

Southern was led by Brian Johnson with 22 points. Forward Peter Cipriano contributed a double-double with 12 points and a game-high 15 rebounds.

“We started out really lethargic in the first half. I don’t know if it was first-game jitters or what, but we did not execute well at all tonight,” coach Jobe said. “Our defense broke down early. The execution of the offense was just flat. If you have to lose, you would rather lost to a Jaguar. We’re just going to have to regroup tomorrow. The effort was simply not there at times.”

Neither team shot better than 45 percent from the field, but 28 turnovers by Southern including 17 in the first half led to a 30-8 points off turnovers advantage for South Alabama, just one point more than the margin of victory.

The two teams traded baskets for the first seven minutes before the Jaguars of the Sun Belt Conference opened a 18-12 lead behind six points from Ivy and five from reserve 6-6 forward Malerick Bedden. Seven turnovers by Southern put the Southwestern Athletic Conference’s Jaguars in an early hole.

Southern overcame full-court pressure by South Alabama to cut the lead in half with 7:39 remaining in the first half, 20-17, on a layup by Cipriano. However, USA answered the run with four straight point of its own to expand the lead to 24-17 at the 5:38 mark.

Ivy’s second-chance basket coupled with a steal and layup on the in-bounds pass from Southern pushed the lead to 10, 28-18. A free throw and a layup capped an 11-1 USA run, as Southern missed four shots and turned the ball over five times during the five-minute stretch.

Just before the half, Bedden scored his half-high 14th point on back-to-back baskets before Chris Young came off the bench to hit a three-pointer to up the lead to 42-24, the biggest of the half.

Young started the second half the same way he ended the first, by hitting a long trey from the right wing and expanding the lead to 19 in the opening seconds. Southern scored the next six points before the USA took a timeout, slowing pulling closer to the Jaguars.

The lead was cut to nine, 52-43, with 12:09 remaining in the game on a layup by Southern’s Henry Williams. South Alabama’s Benjamin Sormonte answered with eight straight points including a pair of three pointers as the Jaguars took a 70-53 lead with 7:20 to play.

Tournament host LSU takes on Nicholls State of Thibodaux, La., in the nightcap of the third-annual Hispanic College Fund Classic at 8 p.m. CST on Friday. The losers and winners will meet in consolation and championship games at 2 and 4:30 p.m., respectively, on Sunday in the Maravich Assembly Center.