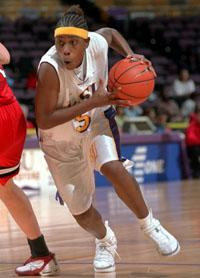 LSU is fresh off two exhibition wins, including a 90-45 victory over the Houston Jaguars last Thursday night. Freshman Seimone Augustus led the way in each of the exhibition games, scoring 18 points against the Basketball Travelers the previous week and 17 against the Jaguars. Junior Doneeka Hodges also had good outings in the preseason, averaging 14.0 points in the two games, while senior Aiysha Smith averaged 13.0 points in the two games.

“The last few practices the team has not been sharp, but they just want to play a meaningful game,” LSU head coach Sue Gunter said. “We know this is going to be a tough hostile environment against Arizona and they are a very good team. Regardless of the outcome, we will know where are stand and what we need to focus on for the rest of the season.”

Arizona also won both of their exhibition games and were led by sophomore guard Dee-Dee Wheeler with 22 points per game and freshman center Shawntinice Polk who averaged 16 points and 13 rebounds in the two games.

Friday’s game is the first of three games in four days for the Lady Tigers.

Following the game against Arizona, LSU will return to Louisiana to face Southeastern Louisiana in Hammond on Sunday and then play the home opener on Monday night against Florida Atlantic.

Season tickets are still available for the Lady Tigers’ 15 home games for $50. Call the LSU ticket office or go online at www.LSUsports.net for more information.