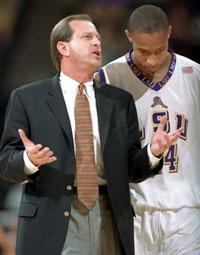 BATON ROUGE — LSU men’s basketball coach John Brady announced the completion Wednesday of a strong fall signing class that recruiting analysts are putting in the top 15 in the nation.

“The signing of these four players to be a part of our basketball program is a major step in continuing the process of putting our team in a position to win significantly on a consistent basis,” said LSU men’s basketball coach John Brady. “Add this class to the players we have returning for next year, one can easily see a continuing bright future for LSU basketball. In addition, we are still working to hopefully add one more recruit to this already outstanding class. We are truly excited about the direction the program is headed.”

Koundjia, ranked No. 24 in the country by Prep Stars, stands 6-8, 210 is entering his senior year in the Laurinburg program after averaging 16 points and 10 rebounds a season ago. He played on the DC Assault AAU team, winners of last month’s prestigious Charlie Weber tournament. This will be his second year of competitive basketball, taking up the game after coming to the United States.

Lazare averaged 15 points and nine rebounds last season for Woodlawn, the Class 5A champions under coach Kenny Almond with a 35-3. Lazare is a 6-7 forward who was named to The Advocate’s Class 5A All-Metro team and named All-State in the classification. He chose LSU over Miami, Mississippi State, Louisiana Tech and Ole Miss.

Neltner, 6-8, 225, has been considered to be a contender for the coveted Kentucky Mr. Basketball title. He is listed as No. 81 in the country according to Bob Gibbons All-Star Report. He was first team all state a season ago after averaging 18 points and 10 rebounds for Highlands.

Minor, 5-10, 185 pounds, was highly recruited by such schools as Cincinnati, Oklahoma, Texas and Arizona before choosing LSU. As the 26th player in the country according to Prep Stars.com The point guard averaged 30 points a game last year with seven assists, six rebounds and three steals a game and has already recorded strong numbers in his first couple of outings in this his senior campaign for BTW.