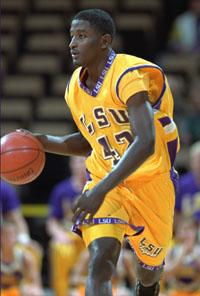 BATON ROUGE — After splitting a pair of exhibition games, the LSU men’s basketball team begins playing for keeps Friday night in the nightcap of the third-annual Hispanic College Funds Classic being contested at the Maravich Assembly Center.

The Tigers will face Nicholls State in the 8 p.m. contest that will be broadcast on radio over the LSU Sports Network (Eagle 98.1 FM in Baton Rouge) and on the Internet at www.LSUsports.net. There is no television for the tournament that opens on Friday with a 5:30 p.m. contest between Southern University of Baton Rouge and the University of South Alabama.

Tickets for the doubleheader are $16 each and will be available at the upper concourse ticket offices of the Assembly Center beginning one hour prior to start of the 5:30 p.m. contest. LSU students get in free with a valid ID card and those students showing valid identification cards from Southern, Nicholls State or South Alabama will get in for $8 each.

The winners of the two games will play for the championship on Sunday afternoon at 4:30 p.m. in the Assembly Center and that game will be preceded by the consolation championship game at 2 p.m.

There are several coaching subplots in the tournament, which has yet to be won by the host team in its first two years of existence. LSU’s opponent, Nicholls State, is now coached by former LSU star Ricky Blanton, making his head coaching debut taking the place of Ricky Broussard, now an assistant on the LSU staff.

LSU coach John Brady will coach a team that for the first time in his tenure will have the full compliment of 13 scholarship players after a somewhat binding limit on scholarships and visits by the NCAA for sanctions he inherited.

In the first game, Southern coach Ben Jobe enters his 31st year as a head coach with 512 victories, tied for 13th all-time in the NCAA among active coaches. He is in the second year of his second stint on “The Bluff” in Baton Rouge. He goes against John Pelphrey, who played and coached at Kentucky, and most recently was an assistant to Billy Donovan at Florida. For Pelphrey it’s also his head coaching debut at South Alabama.

LSU’s starting lineup is still in a state of flux, but expect LSU’s four returning starters: Collis Temple III, Brad Bridgewater, Ronald Dupree and Torris Bright to be in the mix along with possibly last year’s junior college player of the year Jaime Lloreda. The native of Colon, Panama averaged 10 points and nine rebounds in the two exhibition games.