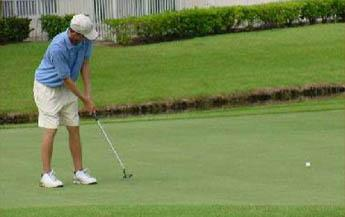 Runion, of Orlando, Fla., Brannan, from Panama City, Fla., and Bailey of Ruston, La. will join the program for the 2003-04 season.

Runion, a product of Olympia High School, took medalist in the Florida State Junior Amateur Championship this past summer by two strokes, shooting a 3-under-par 141. He won five tournaments in the past three years, including the American Junior Golf Association Shell World Golf Village Junior Championship held in St. Augustine, Fla. in July of 2002 when he won in a four-way sudden death playoff.

Brannan, who owns five career titles, won county, district and regional tournaments in three-straight events during his senior season at Arnold High School. On Sept. 25, 2002 Brannan carded a personal-best round of 6-under 66 at the Hombre Golf Course in Panama City.

Bailey was the runner-up at the 2002 Louisiana Golf Association State Junior Amateur Championship after losing a four-hole playoff held at the Shreveport Country Club.

“I am very excited about signing all three of these student-athletes because each of them will add something that our team and program need,” said Jones. “Signing Garrett (Runion) and Ivan (Brannan) is really great because they are both excellent out-of-state players. Signing Chad Bailey is good because he is from Louisiana and you always want to sign the best players from your own state.”

The 2002-03 LSU men’s golf team returns to action on Feb. 8-9 as they travel to Gainesville, Fla., for the 2003 Gator Invitational. LSU won the Gator last season by finishing one stroke ahead of three teams, capturing their first Gator title since 1988.