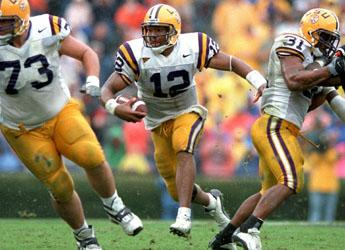 LSU will face the Rebels at 7:42 p.m. on Saturday in Death Valley in the final home contest of the year for the Tigers. Despite its loss to Alabama last week, LSU still controls its destiny in the SEC Western Division and can reach the league’s championship game with wins over Ole Miss and Arkansas. LSU, ranked No. 20 in the nation, stands at 7-3 overall and 4-2 in league play.

Ole Miss, losers of four straight games, is playing for a bowl-bid as the Rebels are 5-5 overall and need one win to become bowl-eligible. Ole Miss, winners of three straight over LSU in Baton Rouge, has a 2-4 league mark.

“We’ve had a pretty good week of practice so far and I’ve been pleased with how the players have bounced back,” LSU coach Nick Saban said. “I think the confidence of our team right now is such that we need for the leadership of the team to really step up. I think prime time players need to do that and I think it is important to do it. I think one of the things that was important to the teams’ success last year down the stretch was everybody had a role on the team and it was very important to everybody regardless of what that role was for them.

“I think when you do not have success a lot of things get magnified and the negative things get magnified and we cannot as a team let that affect our confidence and our trust in each other in terms of what is important to try to win a game. That is one thing that we have tried to emphasize with our players this week and I feel they have responded fairly well.”

Saban said the staff continues to work both Marcus Randall and Rick Clausen at the quarterback position.

“We worked both guys at quarterback this week and I feel like both guys have had good practices this week and have made progress,” Saban said. “The guy that we feel can go in the game and do the best job to help our offense, do what we feel like we need to do to be successful in this game is the one that we will play.

“So far Marcus (Randall) has played and done a good job at times and at times he has gotten frustrated that he has not had more success and I think that affects his performance and that is something that we cannot let happen in the game. I feel like both guys can have a role in the success offensively in the future of this team and I think we will just kind of progress one day at a time, trying to allow both of them to do what they can do to help the team be successful.”

The Tigers will practice again on Thursday followed by a walk-thru in Tiger Stadium on Friday afternoon.