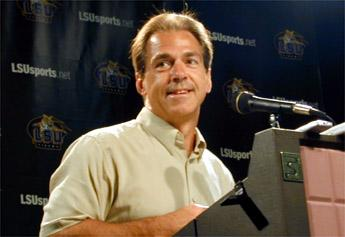 “Well I will start with just a few comments about our team and the game we just played. One thing I think that is pretty obvious in this game, maybe not to everyone else because sometimes you get a little result-oriented, but I was very pleased and proud of how hard our players played in the game. We really gave a lot of effort in this game and I think the problem was not the effort or intensity that we had but an inability to take advantage of opportunities, especially earlier in the game. We had four or five penalties that when we had down and distance in our favor actually stopped drives, mostly illegal procedure-type penalties. We had cadence problems, not getting the ball snapped and everybody else is moving. At this time in the season that type of thing should not be a problem and they are certainly things that are correctable.”

“Obviously the fumble in the third quarter when we were down inside the 25-yard line was another momentum stopper. There is a lot of things from an execution standpoint we certainly need to get better at. It is pretty obvious that we are not playing as well as we need to in some parts of our team and we are going to work hard as a staff to try to do that. We are going to try to make sure that our players continue to give the kind of effort and have the kind of attitude and intensity they need to compete in the game to have a chance to be successful. Alabama is a very good football team and I don’t want to take anything away from them. They are probably the most balanced and physical football team that we have played all year. Even though it was 14-0 going into the fourth quarter we could never take advantage of opportunities or ever get the momentum to our side. I think it is what we do that creates that and we certainly want to continue to emphasize that with our players.”

“The most important thing that we have to do right now as a team is that everybody’s ego, including mine, has to be responsible for their failings. That is the only way you can get better because if you deny you don’t have something you can improve on and something you can work better on, or there is something that you didn’t do that you could or would have done or wished you could have done then you really do not have the right attitude to try to improve yourself. That is certainly what we want to do with our team right now. We believe in our players and we want them to believe in each other and continue to do that. We still have an outstanding opportunity this season in terms of what can be accomplished and what this team can accomplish and that is what we want to focus on. We are disappointed in what happened Saturday night but that is over and the only thing we can do now is learn from it, grow from it and try to get better.”

On quarterbacks Marcus Randall and Rick Clausen….
“I am sure everybody is interested in the quarterback situation. We haven’t really developed a game plan yet for this game. We do not anticipate any changes but we will continue to work with both of our quarterbacks to try to develop them the best we can and utilize the talents of each one of them relative to what they can do to contribute to the success of the team, which is no different from what we have done the last three or four weeks. I think we have to get more consistent play offensively and that probably starts right there, but we also have to dominate the line of scrimmage, control the ball and use the strength of our team which to me is to be able to run the ball effectively and make plays in the passing game, but hopefully feed off our ability to run the ball and use the strength of our team as an asset.

On LSU’s injury situation….
From an injury standpoint (running back) Joseph Addai has a hip pointer, (defensive end) Marquise Hill has a shoulder and (defensive back) Travis Moses had his knee scoped so those three guys will be out of practice today but I think Addai and Marquise Hill should be okay for the game but it is too early to tell that right now.

On the return of running back LaBrandon Toefield….
As far as (LaBrandon) Toefield we are going to continue to increase his workload and increase how much he gets hit in practice so he is hopefully more game-ready for this particular game. I thought we got out of him what we planned to get out of him, five or six carries and he played 22 plays in the game which is about what we anticipated for him to do. I thought he did an outstanding job in the game.”

On Ole Miss…
“Ole Miss is a good football team and they have a great quarterback. Eli Manning is as good a quarterback as anyone has in the league. He is having a very good year and he has a good, consistent receiving corps and they have been able to move the ball effectively and score points in almost all their games with the exception of the Alabama game, but otherwise they have done a good job of moving the ball against everybody. Defensively I think they are much improved and have played well and they are always very good on special teams. Special teams were certainly a big factor in our game last year and that is something we have to make an advantage for ourselves in this particular game. We have not beaten them the last three times they have been here and hopefully our all of our players will take that as a challenge and be ready to play this game.”