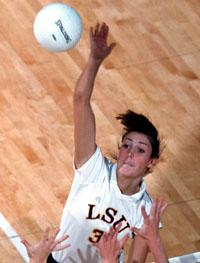 KNOXVILLE, Tenn. — The LSU volleyball team closed out the regular season with a 30-25, 30-25, 30-18, loss to Tennessee on Sunday afternoon on the road in the Stokely Athletics Center.

Despite the loss, the Tigers (17-10, 9-7 SEC) finish in second place in the Southeastern Conference Western Division and in fourth place overall heading into the conference tournament next week. Tennessee improved to 20-10 overall and 8-8 in league play.

“I am disappointed in the way we closed out the season,” said LSU head coach Fran Flory. “Our defense had trouble the entire match and our ball control was very poor. Our offense was also inefficient and did not play well. We did not go out and attack them but instead we let them control the outcome of the match. We will need to regroup as we head into the first round of the SEC Tournament next week.”

Kyra Lancon led the Tigers with 11 kills, while Cara Causey finished with 10. Both hit at over a .400 clip for the match. Causey also finished with three blocks, as did Katie Kubena. Jennifer Hampton led the team with eight digs.

The Tigers played on their heels in the first game and Tennessee took advantage. Three of LSU’s first four points were scored off of Lady Vol service errors as the Tigers fell behind 7-4. The troubles continued as Tennessee stretched its lead to 16-9.

LSU fought back with a 7-3 run to cut the Lady Vol lead to three points, 19-16. After a Tennessee timeout, the Lady Vols went on a 7-3 run of their own to break open the seven-point advantage before closing out the game, 30-25.

The Tigers came much more aggressively to start the second game. With the game tied at eight, LSU went on a 7-3 run to take the four-point lead, its largest of the game. Tennessee came back to tie the game at 15 before the Tigers retook the lead and a three-point advantage, 19-16.

With LSU leading 23-20, the Lady Vols scored seven-straight points to take their first lead since leading 7-6 and put them up by three. Tennessee closed out the game on a 4-2 run to take the two-game advantage, 30-25.

Reception problems plagued the Tigers in the third game as the Lady Vols recorded five service aces. Tennessee used an 8-0 run to break open a one-point game and give the Lady Vols the 15-6 lead. Tennessee went on to close out the game and the match 30-18.

The Tigers now travel to the SEC Tournament as the fourth seed. LSU will face fifth-seeded Georgia on Friday at a time to be determined on Monday.

The Tigers defeated the Bulldogs 3-2 in Athens, Ga., earlier this season in a match that featured the most points scored by LSU in a game in a 39-37 win in game three.