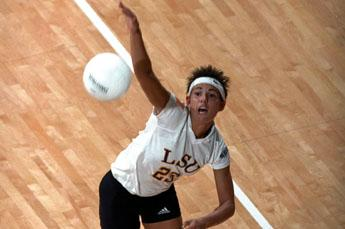 KNOXVILLE, Tenn. — The LSU volleyball team looks to match its Southeastern Conference win total of last season as the Tigers close out the regular season at Tennessee on Sunday at 1 p.m. CST.

LSU (17-9, 9-6 SEC) has not posted back-to-back double-figure wins in conference play wince the 1991-92 seasons. A win over the Lady Vols (19-9, 7-7 SEC) would also guarantee the Tigers a fourth-place seeding in the SEC Tournament next weekend and give LSU its most regular-season wins since posting 20 wins in 1995.

“We were very successful against Tennessee earlier this season,” said LSU head coach Fran Flory. “That was one of the best all-around matches we have played this year. Our seniors really stepped up in that match and we played like a veteran team.

“We are going to need an effort like that again to beat them at their place. They have been playing much better so we will have to be much more efficient offensively that we have been in recent matches and our defense will have to play well to win. It would be nice to have some momentum going into the SEC Tournament next weekend.”

Earlier this season, the Tigers defeated Tennessee, 3-0, in Baton Rouge in a match that was televised on SEC-TV. LSU rallied from a 6-0 deficit in the second game to preserve the match sweep.

Jennifer Hampton led the Tiger effort with 14 kills and 13 digs. Regan Hood added 13 kills and two blocks, while Lauren Cuyler had 10 kills. Katie Kubena recorded 48 assists and 11 digs, as Jenny Greco had 11 digs for the Tigers.

LSU came out and dominated the Lady Vols in the first game. A five-point run by the Tigers opened up an early eight-point lead, 11-3. Tennessee cut the lead to five, but could get no closer as LSU cruised to the 30-19 win.

Tennessee came out and in game two and rattled off six-straight points to start the game. The Tigers finally got on the board and mounted a 10-5 run to cut the Lady Vol lead to one, 11-10. Tennessee stretched its lead to five points again, 19-14, before LSU rallied to tie the game at 24.

After the Tigers jumped ahead 28-25, the Lady Vols scored four straight to take the 29-28 advantage. The Tigers returned the favor with three-straight points to put the game away, 31-29.

In the third game, LSU once again dominated the match. After jumping out to a 7-1 lead, the Tigers opened up a nine-point advantage, 15-6. Tennessee could get no closer than five points the rest of the way as LSU easily took the 30-21 win and the match.

LSU holds a 23-13 overall series advantage over Tennessee. The Tigers are also 8-7 against the Lady Vols in Knoxville, after defeating Tennessee on the road last season. LSU has now won two-straight over the Lady Vols for the first time since winning 14-straight from 1985-1993.

The Tigers will play Alabama for the third time this season in the opening round of the SEC Tournament in Fayetteville, Ark. next Friday at 5:30 p.m.

LSU will enter the tournament as the fourth seed, while taking on fifth-seeded Alabama. The Tigers split a pair of matches with the Crimson Tide earlier in the year, losing in Tuscaloosa, Ala., 3-0, and winning 3-1 in Baton Rouge.