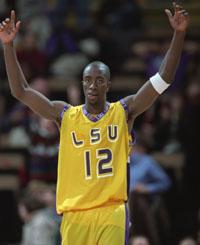 BATON ROUGE — In its second and final exhibition of the 2002-03 season, the LSU men’s basketball team went on a 23-5 run late in the second half to break a 49-49 tie and pull away from the Houston Sports Group, 81-71, on Friday night in the Maravich Assembly Center.

LSU, which opens the regular season on Nov. 22 when it plays host to Nicholls State in the first game of the Hispanic College Fund Classic, was led by four players in double figures including Collis Temple with 15, Ronald Dupree with 14, and Shawnson Johnson and Darrel Mitchell with 13 points each.

The teams combined for 43 turnovers, with the Tigers committing one less than the Houston Sports Group.

To start the game, the Tigers turned the ball over five times in the first four minutes to fall behind 6-5 on 2-of-6 shooting. Back-to-back baskets by Bright and Dupree brought LSU back to 50 percent from the field and gave the Tigers a 9-6 lead into the first media timeout.

Brady wasted no time going to his bench, bringing in Jaime Lloreda, Tony Gipson, Charlie Thompson and Johnson in the first six minutes with Dupree as the lone remaining starter on the court. However, the production remained the game, as the reserves and Dupree made only 1-of-4 shots and added four turnovers over the next four minutes. LSU led 12-8 with 11:59 to play in the half.

Three baskets by Johnson — a conventional three-point play off a fast-break assist from Gipson, a turnaround jumper in the lane and a dunk in transition — moved the Tigers ahead 19-11, before reserve guard Darrel Mitchell got into the action with a eight-foot jumper from the left baseline.

Johnson, who missed LSU’s first exhibition after violating team policy, scored nine points in his first six minutes of play as a Tiger.

Turnover No. 13 of the half gave the Houston Sports Group an opportunity to cut the lead to 22-18 on a pull-up jumper by Earl. Forty seconds later, Earl scored from 15 feet out on the right wing to bring HSG within two with 6:04 to play in the half.

Reserve guard Courtney Trask scored his first points of the game before Dupree added back-to-back baskets. Bright then hit a three-pointer from the right wing, the Tigers’ second in eight tries in the half, to expand the lead to five, 31-26.

Two free throws and a second-chance layup by Lloreda capped a 9-0 by LSU and put the Tigers up by 11, 37-26. Mitchell, Mr. Basketball in Louisiana in 2002, answered four straight points by HSG with four of his own as the half came to and end with the Tigers in the lead, 41-32.

Starting forward Brad Bridgewater scored the first four points of the second half to move the lead to 13, but HSG’s Herb Baker hit his next two shots from the field to keep the game within reach at the 15:55 mark.

As LSU missed its next seven shots, HSG’s Terrance White scored a pair of free throws and a layup off a Dupree turnover to bring the exhibition squad within three, 47-44. Bright broke the Tigers’ scoring drought with a second-chance layup, but Trey Austin answered with a three-pointer on the other end and a basket off a turnover to tie the game at 49-49.

Mitchell hit LSU’s first trey in eight second-half attempts and Collis Temple scored a quartette of free throws, as LSU went on a 16-4 run out of a timeout and showed its first signs of poise under pressure in this exhibition season. The Tigers increased the lead to 12, 65-53.

A second-chance three-pointer by Temple from the left wing and a pair of strong layups by Dupree and Lloreda pushed the lead to 18, 72-54, with just more than five minutes to play.