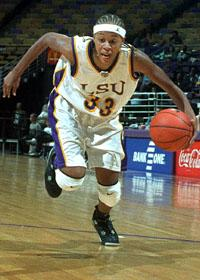 BATON ROUGE — Seimone Augustus, the nation’s top recruit in the Class of 2002, led four Lady Tigers in double figures as the third-ranked LSU women’s basketball team came alive at the end of each half to dominate and double-up the exhibition Houston Jaguars, 90-45, on Thursday evening in the Maravich Assembly Center.

“We’re not where I think we need to be,” said head coach Sue Gunter. “Perhaps it’s just me being very apprehensive because this time next week we are in Tucson waiting to play a very good Arizona team that is loaded and they are very, very good.”

The Lady Tigers came out of the locker room in each stanza slowly, but outscored the Jaguars, 68-24, in the final 13 minutes of each half to run away with the victory and outscore its two exhibition opponents, 203-105, to preview the 2002-03 season.

“By no means am I down,” Gunter added. “I am as excited as I can be about this team.”

One season removed from a SEC Tournament runner-up squad which finished its run in the NCAA Women’s Basketball Tournament with only seven healthy players, all 12 Lady Tigers who dressed saw action. Freshman Treynell Clavelle missed the game due to a death in the family.

Augustus, a Baton Rouge native, scored 17 points on 8-of-14 shooting and led the team with eight rebounds in 28 minutes on the floor. She was joined in double figures by twins Roneeka and Doneeka Hodges, who scored 14 each, and Naismith Award candidate Aiysha Smith who added 11.

“I saw points were individual players did some really nice things,” Gunter said. “Kisha James gave a nice spark to the team off the bench. DeTrina is beginning to come around. She did some things only DeTrina can do.”

Andrea Jackson led the Houston Jaguars with 10 points on 3-of-14 shooting.

Spearheaded by Augustus, Smith and White, the Lady Tigers dominated the paint early on to take a 14-7 lead, scoring 12 of its first 14 points in the post with a pair of free throws on conventional three-point plays.

It wasn’t until the 14:12 mark of the first half when LSU was forced to take a jump shot, and Doneeka Hodges took advantage of it from 17 feet on the right wing to increase the lead to nine.

Nearly four minutes later, Hodges ended a scoring drought by both sides and increased the Lady Tigers lead to 11, 22-11, with another 17-footer, this time from the left wing.

A 21-0 run by LSU put the game out of reach early and allowed the Lady Tigers to experiment with several different personnel combinations, offensive sets and even a few presses.

The Jaguars were held scoreless from the 12:02 mark until the Andrea Jackson hit a three-pointer with 2:58 left in the first half. During the stretch, the Lady Tigers held the Jaguars without a field goal in eight attempts and forced nine turnovers.

The Jaguars scored 12 of the second half’s first 16 points, cutting the lead to 52-30 with 13:49 left in the game as LSU missed nine straight shots and turned the ball over three times after starting the half with a three-pointer by Roneeka Hodges. A second-chance basket by Augustus and fast-break layup by Doneeka Hodges got the Lady Tigers on track, starting a 32-5 run and moving the lead to 84-35 with just more than three minutes to play.

Reserve 6-3 center Tillie Willis scored six points down the stretch, as coach Gunter cleared her bench and rested her starters for the Nov. 22 season opener against Arizona in Tucson, Ariz.