Tigers Return to the Court to Complete Exhibition Season 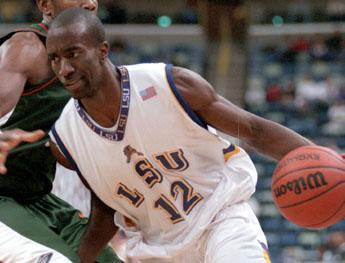 BATON ROUGE — The LSU Tigers, now one week out from the opening game of the 2002-03 season in the Hispanic College Funds Classic, tries to even its exhibition record when it takes on the Houston Sports Group in a 7 p.m. contest Friday at the Maravich Assembly Center.

There is no radio or television broadcast for the contest, but live stats can be followed on www.LSUsports.net. Tickets for the game are $5 each and will be available beginning at 5:30 p.m. at the new athletic ticket windows on the upper concourse of the Maravich Assembly Center.

LSU is coming off a 78-69 come from ahead loss to Global Sports on Nov. 7, a game in which the visitors went on a 22-4 run in the second half to get the win. LSU’s veterans Ronald Dupree and Torris Bright were a combined 4-for-21 from the floor, although Dupree stepped up to the free throw line and his 8-of-11 tosses to finish in a three-way tie for high scorer with 14 points. Collis Temple III off the bench also had 14 points, as did junior college newcomer Jaime Lloreda along with 10 boards.

Besides playing better defense, the Tigers will look to improve the percentages after shooting 41.9 percent against Global Sports and just 18.2 percent (4-of-22) from the three-point line.

The Houston Sports Group, scheduled to play Prairie View on Thursday, is made up of players mainly from Texas with the exception of Trey Moore from Mississippi State and former Tiger Louis Earl, who played for LSU from 1996-98.

The Tigers open the regular season on Nov. 22 when LSU hosts the Hispanic College Funds Classic at the Maravich Assembly Center. Southern and South Alabama will play the 5:30 p.m. opener with the Tigers and the Nicholls State Colonels in the 8 p.m. nightcap. The losers of the opening round games play on Nov. 24 at 2 p.m. while the championship game is set that day at 4:30 p.m. Tickets are on sale at the LSU Athletic Ticket Office.