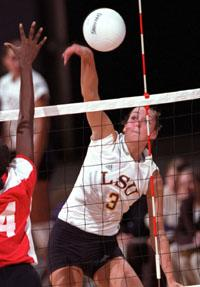 With the loss, the Tigers fall to 17-9 overall and 9-6 in the SEC. Arkansas improves to 22-5 overall and 13-2 in the league, completing the two-match season sweep of LSU. The Tigers remain in second place in the SEC West and fourth place in the overall conference standings with one regular-season match remaining.

“I was disappointed in our performance tonight,” said LSU head coach Fran Flory. “We had trouble running our offense and our defense did not step up the way we needed them to do in a match like this. We also committed 11 service errors, which is basically giving them 11 points.

“You have to give credit to Arkansas for playing very well, but we did not go out there and attack like we needed to for a win.”

Strong serves by the Lady’Backs kept the Tigers off balance in the first game. While Arkansas hit for .320, LSU posted only its third negative hitting mark of the season at -.054.

LSU dramatically improved its hitting in the second game, recording 20 kills at a .364 clip, equaling the mark of Arkansas. The Tigers, however, gave away seven points on service errors, including a critical error that led to the eventual game winner for Arkansas.

The Lady’Backs jumped out to the early 5-1 lead before LSU battled back to tie the score at seven. With the score tied at 10, Arkansas went on a 13-8 run to take its largest lead of the game. The Tigers were not done and used a 5-1 run to cut the Lady’Back lead to just one.

Arkansas pulled ahead again, 28-25 before serving for the game, 29-27. LSU fought off a pair of game points to tie the game at 29. Arkansas served for the game three more times before finally putting the game away on a kill on its sixth attempts, 34-32.

The Lady’Backs once again came out with the early 5-1 advantage and the Tigers were never able to recover. After LSU cut the Arkansas lead to one, 7-6, the Lady’Backs went on a 7-2 run to expand the lead to six.

The Tigers could get no closer than two points the rest of the way. With Arkansas leading 16-14, the Lady’Backs used a 9-4 run to put the game out of reach, going on to win the game and the match, 30-25.

The Tigers close out the regular season at Tennessee on Sunday at 2 p.m. ET. LSU defeated the Lady Vols 3-0 earlier in the season in Baton Rouge in a match that was televised on SEC-TV.

The following weekend, the Tigers return to Fayetteville to begin play in the SEC Tournament on Friday. LSU will enter the tournament as either the fourth or fifth seed and will play in the third match of the day at 5:30 p.m.