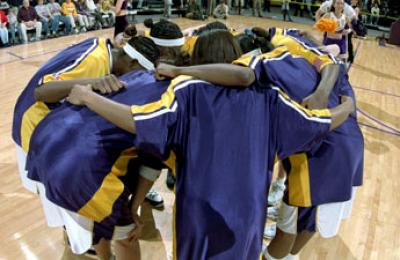 The Lady Tigers are coming off a 113-60 victory over the Basketball Travelers last Friday in the first exhibition game. Freshman Seimone Augustus led LSU with 18 points, while senior Aiysha Smith added 15 points and seven rebounds and junior Doneeka Hodges had 14 points. Senior Ke-Ke Tardy also had a solid game with 13 points, while freshman Wendlyn Jones had 12 points and junior Roneeka Hodges has 10 points and five assists.

The Jaguars, a team made up of former collegiate players from around the nation, has played nine games so far in the preseason. They have dropped all nine contests, including the most recent 88-65 loss at the Univ. of Houston on Monday night. The Jaguars have also played Notre Dame, Baylor, Louisiana Tech, Mississippi State and Tulane to name a few.

Members of the LSU football team, including wide receiver Devery Henderson and quarterback Marcus Randall, will be at the game throwing mini footballs into the stands and will even throw one autographed football to a lucky fan.

Following Thursday’s game, the Lady Tigers will open the regular season on the road in Tucson, Ariz., when they face the Arizona Wildcats next Friday at 8 p.m. CST. That game is the first of three for LSU in a span of four days. They return from Arizona to play at Southeastern Louisiana on Sunday and then return to Baton Rouge to host Florida Atlantic in the Pete Maravich Assembly Center on Monday at 7 p.m. CST.