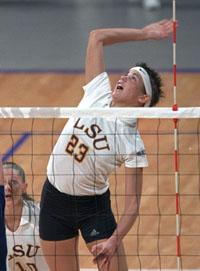 The Tigers (17-8, 9-5 SEC) have won seven of their last eight matches and currently hold a three-match lead over Alabama in second place in the SEC West. LSU stands at fourth place overall in the league, two matches ahead of Tennessee and Georgia with a pair of regular-season matches remaining.

Arkansas (21-5, 12-2 SEC) is riding a six-match winning streak and has won 10 of its last 11 matches. The Lady’Backs lead the Western Division by three games and are in third place in the overall standings.

“This is always a big match for us,” said LSU head coach Fran Flory. “Arkansas is a big, physical team and has had a lot of success at home. When we lost to them early in the season we did a poor job of running our offense and were outdug by 17. We will need to play smart, be efficient offensively and stay aggressive at the net to win.”

The Tigers and Lady’Backs met in their conference opener earlier this season. Arkansas rallied to defeat LSU 3-1 after the Tigers won the first game. The match was played as Tropical Storm Isidore pounded much of south Louisiana, prompting the match time to be moved from a 7 p.m. start to 3 p.m.

LSU finished the match with 55 kills and 59 digs, while Arkansas recorded 69 kills and 76 digs. The Tigers did a good job at the net, recording 10 blocks, but the Lady’Backs matched LSU with 12 blocks of their own. Neither team hit with much efficiency, as the Tigers finished hitting at a .190 clip and Arkansas recorded a .202 attacking percentage.

Jennifer Hampton led the Tigers with 17 kills and 16 digs, while Katie Kubena also recorded a double-double, with 13 digs and 39 assists. She also had three blocks on the day.

Lauren Cuyler was the only other Tiger in double-figures with 15 kills. Jenny Greco added 11 digs and Rachel Vogt led LSU with four blocks, including two solo blocks.

The Tigers got 12 of their 15 kills in the first game from Hampton and Cuyler to jump out to an early one-game lead. Arkansas rebounded from a .081 hitting performance to hit .326 in the second game and tie the match at a game apiece.

In the third game, the Tigers jumped out to a 15-11 lead, but Arkansas rallied back to tie the game at 22. Arkansas then took the lead and never relinquished it, although the Tigers did tie the game four more times. With the match knotted at 28, Arkansas got a kill by Sara Kincaid to give the Lady’Backs game point and then got a block by Michaela Koumarova and Libby Windell to take the game.

LSU closes out the regular season at Tennessee on Sunday at 2 p.m. ET. The Tigers easily swept the Lady Vols in Baton Rouge earlier this season in a match that was televised on SEC-TV.