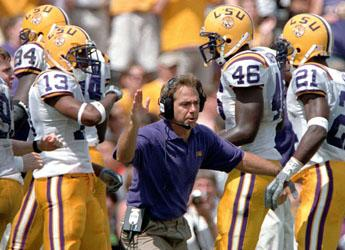 “Well we are most certainly happy to have a victory and I guess the way we got the victory, we maximized our national exposure by winning on the last play of the game because it seems that is all you see and all everybody talks about. I think everybody needs to keep in mind the fact that it was a tremendous play by Devery Henderson to make the play that he made. The ball happened to be tipped in the right direction and he was hustling on the play and giving tremendous effort and he just made an outstanding play. We practice that play every Thursday and it has not worked once all year long so it makes one think that there might be a little divine intervention that may have had something to do with the outcome.”

“I think from the team standpoint we are a better team than what we played. I think our team needs to realize that there are some areas and some things that we need to improve on. I thought that we did some exceptionally good things in the game. We played really well on defense with the exception of one pass play for the first 40 minutes of the game and it seemed like once we got the punt blocked, which is a major error in the game, we never really played as well after that. We had a chance to stop them on third and three and didn’t get it done and on the last couple of drives and I even think we lost our poise to some degree. We made some mental errors and had four penalties on defense and we have not had a lot of penalties on defense this year. We had some at real critical times that kept their drives alive and never gave us the opportunity to stop them, and then gave up a couple of big plays.”

“Offensively I just think we need to play with more consistency. The good thing we did on offense was that we made some big plays. That was a real plus. I think big plays have a tremendous effect and we didn’t turn the ball over, and the combination of that was probably the saving grace. We would like to be a little more consistent running and throwing the football. We just need to keep working at it, and working with the players we have and getting them to believe in what we are doing and getting them to believe in each other and trying to get everyone to believe that if we do it together then we definitely have a chance to be successful.”

On playing for 60 minutes each week…

“We talk about playing 60 minutes all the time and we actually broke it down even further to 3,600 seconds in a game. That is what we have to expect from our players now because two seconds was the difference in making a play at the end of the game and not making it, and we were fortunate to be able to make it. 3,600 seconds is what we are trying to play for from now on. I think that there is a lesson that everyone needs to learn from to some degree, and that is that as a player you have to think about what you have to do in the game, but sometimes you have to think about what you can’t do. I think sometimes that is what our players need to do more of. We have far too many penalties; you can’t block a guy in the back, you can’t hold a guy, if you carry the ball you can’t fumble it, you can’t jump offsides. It takes a little bit of concentration, focus and discipline, not only in what your job is to do, but what you can’t do. I think that the great lesson is that you are supposed to knock the ball down at the end of the game, not tip it up. There is a lesson to be learned in that because you can’t tip the ball up in the air in a situation line that but that is what happened and we benefited from it.”

“The challenge that we have this week is one of the biggest and toughest of the year. This is maybe the best all-around football team (Alabama) that we have played all year long. They have an exceptionally good defense, starting with probably the best front four maybe in college football. They have a very good defensive team overall that has only allowed 43 points or something in the last four games which is just of 11 points a game, so they are playing very well right now. Offensively they are getting over 30 points a game and over 400 yards a game and they use a two-quarterback system to some degree. Both guys are pretty effective at what they do. I think they are a much better passing team than a year ago and they can certainly can run the football. The fact that they run some option is also a challenge for us. They have also been very good on special teams. This is really a good football teams that we are playing that is an all-around team. They are productive on offense and effective on defense and they play well on special teams.”

“Our injury situation this week is that Randall Gay is probably the only that is going to be out of practice today because he has a shoulder injury. We do not think that it is that serious and we do not think that he should be out of the game with it. LaBrandon Toefield will start practice today in a red shirt. It will be six weeks, which is the minimum amount of time for this game that he possibly could come back. I am not sure that he will be ready to play in this game but maybe sometime in the near future if he continues to make progress if he feels comfortable with what he is doing and how we can protect it in the future. The big thing we want to do is make sure that we are not putting him in any risk when he goes out there. There is always some risk when you go out there but I am talking about any more risk than he would be in at any other time that he plays.”