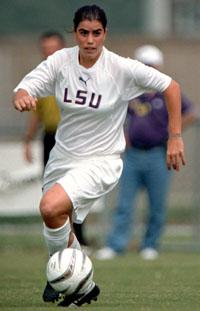 “This is quite an honor for both Mandy and Steph,” said LSU head coach George Fotopoulos. “The All-Tournament team is voted on by the coaches and it shows how much respect that our players have gained in this league. Both Mandy and Steph played very well this past weekend and they’ve done a great job for us all season long.”

In the victory, Heintz notched her ninth game-winning goal of the season and recorded her SEC-leading 24th goal of the year. Keating, the Tigers’ explosive junior from Vero Beach, Fla., used both her speed and quickness against Auburn and Florida to stretch the defense and accumulate eight total shots on the weekend.

“I’m just glad that some of our players were recognized for their ability in this league,” Fotopoulos said. “This is the first time that we’ve ever had All-Tournament members and I’m proud of their hard work and dedication throughout this season.”