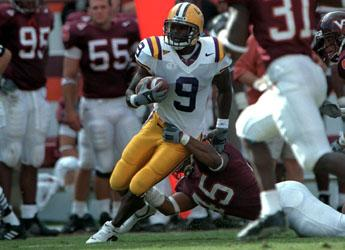 Henderson was on the receiving end of one of the wildest finishes in the history of college football. The junior hauled in a tipped “Hail Mary” pass from Tiger quarterback Marcus Randall on the last play of the game for a 75 yard touchdown to give LSU a 33-30 road victory over Kentucky.

Henderson caught five passes for 201 yards and three touchdowns. His first score came on a shovel pass that saw him outrun the Kentucky defense for a 70-yard touchdown.

Henderson had 298 all-purpose yards, the fourth best total in LSU history, and his 40.2 yards per reception tied a school record.

Quick posted 14 tackles for Tulane as the Green Wave defense held TCU without an offensive touchdown in a 17-10 defeat. The Mandeville native’s 14 tackles was a team season high. The junior is third on the team with 69 stops on the season. Quick is a transfer from Kansas State where he was a fullback.

A panel of LSWA members across the state vote on the players of the week.