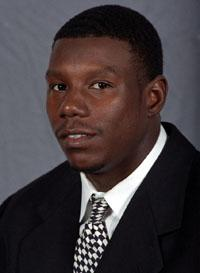 BATON ROUGE — LSU wide receiver Devery Henderson, the player on the receiving end of the Tigers’ 75-yard “Hail Mary” touchdown pass as time expired to beat Kentucky on Saturday, has been named the Southeastern Conference Offensive Player of the Week, the league office announced on Monday.

Henderson, a junior from Opelousas, La., won Saturday’s game after catching a twice-tipped ball in stride at the Kentucky 15-yard line. He then broke a tackle at the 10-yard line and raced into the endzone for what many is calling the most memorable play in school history.

For the game, Henderson caught five passes for 201 yards and three touchdowns. In addition to his game-winner, Henderson caught a 70-yard TD pass in the first quarter and then gave the Tigers a 14-7 halftime lead with a 30-yard TD reception with nine seconds left in the second quarter.

Henderson finished the contest with 298 all-purpose yards, the fourth-best total in LSU history and his 40.2 per catch average on Saturday tied the school mark set by Carlos Carson in 1977.

Henderson has been on the receiving end of LSU’s last five touchdown passes, and for the year, he has 19 receptions for 403 yards and a team-high seven touchdowns.

Alabama free safety Charles Jones earned defensive player of the week honors from the league after posting 10 tackles to go with two forced fumbles and one interception in the Crimson Tide’s 28-14 win over Mississippi State. Arkansas’ David Carlton kicked three field goals in the Razorbacks 23-0 win over South Carolina to earn the league’s special teams honor.