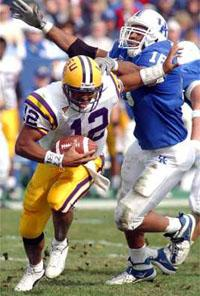 BATON ROUGE — Current LSU football season ticket holders will receive this week information on how to order tickets to the Tigers’ post-season game or games.

LSU season ticket holders will have the opportunity to apply for tickets to the SEC Football Championship Game to be played in Atlanta on Dec. 7 and to bowl games to be played during the holiday season. The Tigers are vying for a spot in the SEC Championship and have already qualified to play in a bowl game.

The deadline for current LSU season ticket holders to apply for tickets has been set for Monday, Nov. 25.

There will be no limits placed on how many tickets can be ordered by current season ticket holders, but fans are advised in the information packet that limitations will be put in place if the demand for tickets exceeds the supply available to LSU for any games. The information packet also includes the priority system that will be used if limitations become necessary.

Tickets for any postseason games involving LSU will be allocated first to players, coaches, LSU students and staff. The Tiger Athletic Foundation will receive an allocation to distribute to season tickets holders among its membership based upon the TAF Priority Point System. Another allocation of tickets will go to football season ticket holders who currently are not members of the Tiger Athletic Foundation.

Tickets may be purchased by current LSU season ticket holders by going in person to the LSU Athletics Ticket Office, by mail or through the Official Web Site of LSU Athletics, www.LSUsports.net. Payment may be made by Visa, MasterCard or American Express. Credit cards will be charged only when it is determined the game or games in which LSU will play in the post-season.

LSU this year is instituting an e-mail notification system to keep ticket applicants apprised of the ticket situation for each game in which the Tigers play in the post-season.