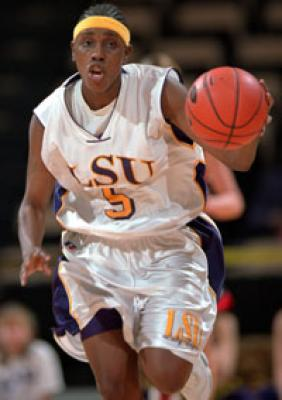 Petra Mlenjnikova paced the Travelers, who go to Alcorn on Sunday, with 16 points as the only player in double figures.

In all, 12 Lady Tigers played and all scored at least two points in the game.

“I think you’ll probably agree with me, we haven’t forgotten how to substitute. We did substitute a lot,” said LSU Coach Sue Gunter. “I had to laugh just a little bit at Ke-Ke and Temeka who were playing 40 minutes a game last year, saying ‘coach we’re not tired.’ That’s a good thing, a very good thing.”

The game marked the debut of Baton Rouge prep All-American Augustus at the Assembly Center. Augustus looked good in the early going, getting a couple of buckets and two free throws before picking up two fouls which had her on the LSU bench for most of the first half. For the game, she played 24 minutes, hit six of 12 shots, six-of-seven free throws with two rebounds, two assists and three steals.

The Lady Tigers got off to a strong start scoring six points in 52 seconds as Smith laid the ball in off the opening tip, Doneeka Hodges hit a jumper and Tardy laid it in off an Augustus assist.

The LSU lead would stretch to 12 at 18-6 at the 15:06 mark when All-American DeTrina White made her first bucket since the end of the 2000-2001 season after sitting out last year with injuries.

LSU opened the lead to 20 at 28-8 with 10:13 to play on a Doneeka Hodges lay in and expanded the lead twice to 25 points several times the first at 40-15 with 6:17 to play. The Lady Tigers with things comfortably on cruise control went to the dressing room up 55-27 when Kisha James scored in the final 12 seconds of the half.

The Basketball Travelers tried to make up a little ground at the start of the second half when the Lady Tigers came out in the first five minutes shooting just 18.2 percent. But LSU quickly got things going again and had has much as a 54-point lead in the final three minutes of the contest.

“Overall I was pleased,” said Gunter. “We did a lot of good things. In the first half I think the thing that we as coaches talked about the most was that we had 12 turnovers in the first half and we certainly reduced those in the second half (two – 14 for the game). That was one thing that really concerned me because they were unforced turnovers. But I think with all things being said, we did pretty much what we wanted to do.”

LSU crossed the century mark with 3:51 to play in the contest when a free throw by Roneeka Hodges made it 100-50.

The Lady Tigers have one more exhibition game left on Nov. 14 (Thursday) at 7 p.m. in the Maravich Assembly Center against the Houston Jaguars before opening the season on Nov. 22 at Arizona.