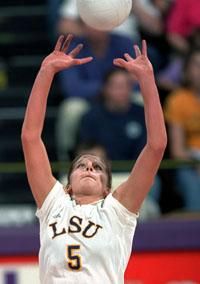 With the win, the Tigers (15-8, 8-5 SEC) have now won six of their last seven matches with just three regular season matches remaining. Mississippi State dropped its 10th straight match and fell to 10-17 overall and 1-12 in the SEC.

“We are fortunate to come away with the win tonight,” said LSU head coach Fran Flory. “I am proud of the way we fought back in the end, but we dug ourselves a deep hole that we had to get out of.

“It was an heroic effort by Mississippi State, but we did not do a good job of determining our own outcome and that is something that we will need to get better at the remainder of the season.”

The Tigers were led by Jennifer Hampton with 24 kills and 17 digs. The senior also added three service aces. Kyra Lancon recorded 15 kills and 10 digs, while Regan Hood had 13 kills and a game-high six blocks.

Katie Kubena was one dig away from a triple-double with 11 kills, 54 assists and nine digs. She also recorded four blocks and a service ace. Rachel Pittman added 15 digs, while Rachel Vogt had 14.

The first game was marked by sloppy play on both sides of the net. Neither team got much going offensively, with LSU hitting .103 and Mississippi State hitting .073 for the game. The Tigers took their largest lead of the game, 10-7, on an attacking error by Mississippi State.

The offenses picked up the pace from the game one in the second game, with LSU hitting at a .233 clip with 20 kills. Mississippi State, however, jumped out the first lead of the second game, 10-7. The Tigers fought back to tie the game at 12, but the Bulldogs took the three-point advantage again, 20-17.

Mississippi State served for the game once and LSU served for game point three times before finally putting the game away on the fourth game point, 33-31 on a double hit by the Bulldog setter.

The Tigers came out of the locker room and dominated the third game. LSU jumped out the 9-4 lead before Mississippi State cut the lead 12-9, the closest the Bulldogs would get the remainder of the game.

The Tigers used accurate hitting to pull away, committing only two attacking errors in the game. LSU also got three blocks and a pair of service aces as part of an 18-11 run to close out the game, 30-20, and take the 2-1 advantage.

As much as the Tigers dominated the third game, Mississippi State came out and took command of the fourth game. LSU’s hitting proficiency dropped to just .116, recording just 12 kills with seven errors.

The Bulldogs charged ahead to the 10-5 lead. LSU cut the lead to two points, 10-8, but got no closer the remainder of the game. Mississippi State went on a 9-2 run to break the game wide open with the 19-10 advantage. The Bulldogs went on to take the game, 30-20, and force the fifth game.

The Tigers jumped out to the early 4-1 lead in game five, but Mississippi State came back to tie it up at four. Neither team got more than a point advantage the remainder of the way. The game was tied nine more times before the Tigers got a kill by Vogt on game point for the win, 15-13.

The Tigers now travel to Oxford, Miss., to face Ole Miss on Sunday at 1:30 p.m. in the Gillom Sports Complex. LSU swept the Lady Rebels in Baton Rouge two weeks ago and has now won three-straight over Ole Miss.