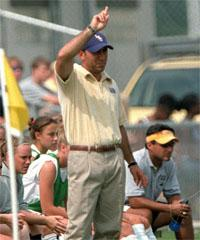 OXFORD, Miss. — The LSU soccer team had four shots hit either the post or the crossbar on Friday as the Tigers missed numerous scoring chances in a 2-0 loss to the Florida Gators in the semifinal round of the 2002 Southeastern Conference Tournament here in Oxford, Miss.

“I think that the bottom line for us today is that we didn’t finish our chances,” said LSU head coach George Fotopoulos. “Whenever you have that many chances against a team like Florida and you don’t put them away, then it’s going to come back and haunt you, and that’s what happened today.”

With the loss, LSU dropped to an overall record of 12-5-3 on the season and ended another era of its most successful season in school history. The Tigers achieved numerous firsts during the 2002 campaign including a win versus a ranked opponent, a No. 6 NSCAA regional ranking and an SEC Tournament victory.

On Thursday, LSU knocked off top-seeded Auburn, 1-0, in the opening round of the SEC Tournament to advance to Friday’s semifinal contest against Florida.

Last season, the Gators advanced to the Final Four and won both the SEC championship and the conference championship.

The LSU soccer team will await the announcement of the 2002 64-team Division I Women’s Soccer Championship bracket on Monday, Nov. 11 at 3:30 p.m. as the Tigers own a possibility of earning an at-large bid.

“I feel that we have a chance to make the NCAA Tournament, but right now we’re on the outside looking in,” Fotopoulos said. “We’ve beaten some top-20 teams and if Florida wins the SEC Tournament then today’s 2-0 loss isn’t really a bad loss for us. We’ve earned some good wins this season and obviously that win over Auburn yesterday helped us a lot.”

Florida (10-9-2) jumped out to an early 1-0 lead on Friday with a goal at the 11:02 mark in the semifinal contest. The score occurred directly after the Gators’ third corner kick of the opening half when Florida’s Candace Rivers centered a pass to Danielle Murphy who slipped a Tiger defender and floated a shot into the left-hand corner of the net.

Shortly after Florida gained its 1-0 advantage, the Tigers rebounded with a scoring opportunity of their own as sophomore Artie Brown broke down the field, eluded a pair of Gator stoppers and sailed a shot that bounced off of the right goal post. The shot at the 25:02 mark in the first half of play proved to be LSU’s strongest scoring chance of the period.

Despite trailing at the half, LSU outshot the Gators, 7-3, in the first 45 minutes of play and registered one shot on goal by junior Rachel Cohen.

Early in the second half, LSU’s Stephanie Keating stole an errant pass from the Florida defense and broke into the box for a one-on-one opportunity with goalkeeper Jordan Kellgren. Keating, the Tigers’ junior midfielder from Vero Beach, Fla., fell inches short of tying the score at 1-1 as she rifled a shot that pinged off of the crossbar and deflected out of bounds.

“I guess that because we’re so young and so inexperienced we didn’t handle the pressure of missing those opportunities like we should have,” said Fotopoulos. “We just weren’t able to shake then off mentally and stay in the game like we would have wanted to.”

At the 52:56 mark in Friday’s SEC Tournament contest, Florida extended its lead to 2-0 with a goal by sophomore Ashley Kellgren. The score was assisted by Cherry Pickman and proved to be Kellgren’s first goal of the 2002 campaign.

LSU’s Mandy Heintz and Ashley Mitnick each earned scoring chances for the Tigers on a late offensive flurry in the second half. Mitnick, LSU’s four-time All-SEC member, blasted a shot off of a direct kick that hit the left post and trickled to Heintz who kicked a shot that clanged off of the crossbar.

With the victory, Florida advanced to its seventh-consecutive SEC Tournament championship game and will face either Tennessee or Kentucky at 2:30 p.m. on Sunday.