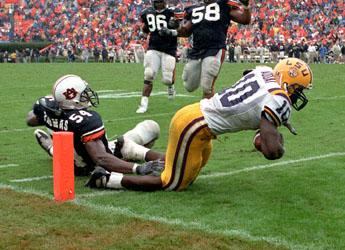 LEXINGTON, Ky. — After getting an extra week to mend its physical, emotional and mental pains, the LSU football team returns to action on Saturday against Kentucky in a pivotal Southeastern Conference matchup beginning at 11:30 a.m. CST.

Because of Jefferson Pilot Sports television, the game will have a matutinal beginning uncharacteristic of November football games at the University of Kentucky.

LSU (6-2, 3-1 SEC) had an open date on Nov. 2, one week after returning from “The Plains” with a 31-7 loss to Auburn. The Tigers sit atop the SEC Western Division standings and control their own destiny, with Auburn looming in second place with a 4-2 record.

Kentucky (6-3, 2-3 SEC), which is ineligible for the SEC title and postseason play this season, was beaten in nearly every statistical category against Mississippi State last weekend, but defeated the hapless Bulldogs, 45-24, in Starkville.

The Wildcats were out-rushed, 230-105, and only gained 266 yards of total offense. However, Mississippi State had five turnovers including four interceptions, one of which was returned 53 yards be Derrick Tatum for a touchdown.

Wide receiver/return specialist Derek Abney was the difference in the game, as the All-SEC junior returned two punts for touchdowns of 69 and 52 yards.

After the road trip to Kentucky, LSU returns to Baton Rouge for a pair of games in Tiger Stadium against Alabama and Ole Miss. LSU completes the regular season on Nov. 29 against Arkansas in Little Rock.