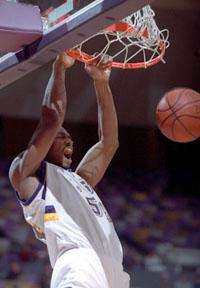 BATON ROUGE — The LSU men’s basketball team attempted to shake off a rain-filled summer’s worth of rust in 40 minutes of play, however, they couldn’t shake the Global Sports on Thursday night in the Maravich Assembly Center, as the Tigers dropped their first exhibition game since November of 1998, 78-69.

The Tigers play one more exhibition on Nov. 15 before opening the regular season on Nov. 22 against Nicholls State in the Hispanic College Fund Classic. Season tickets are on sale now on LSUsports.net or by contacting the LSU Ticket Office at 225.578.2184 or 1.800.960.8587.

Global Sports used a 22-4 run late in the second half to erase a four-point Tiger lead with less than 12 minutes to play and pull away from the cold shooting LSU squad down the stretch.

The Tigers were led by Ronald Dupree, junior college transfer Jaime Lloreda and Collis Temple III who each scored 14. Brad Bridgewater was the only other Tiger in double figures, scoring 11, while Lloreda completed a double-double with 10 rebounds to lead the team.

As the rust slowly wore off, the Tigers missed their first four shots from the field and turned the ball over twice before Bridgewater scored LSU’s first basket of the exhibition season on a fast-break dunk assisted by Torris Bright more than three minutes into the game. However, Bridgewater’s score started a trend as the Tigers hit 4-of-5 shots to trail 9-8.

After a three-pointer by Damon Flint gave Global Sports a four-point lead, a pair of free throws and Thomas Davis’ wrap-around layup from Charlie Thompson gave the Tigers their first tie of the game at 14-14 with 13:01 to play in the half.

Ronald Dupree‘s second-chance dunk tied the game once again at 17-17, but Flint hit a second trey to go ahead by four, 21-17 two mintues later.

Collis Temple added a second-chance layup of his own off a Dupree miss before picking Flint’s pocket on the other end to start a fast-break dunk by Dupree. The game was again tied at 21-21.

LSU took its first lead in transition with just more than seven minutes to play in the half, as Temple took a half-court pass from Bright for a layup and a 23-21 advantage.

For as well as they converted in transition, the Tigers struggled to get their halfcourt in gear in the first half, missing their first eight three-point attempts.

Global Sports went on an 8-0 run to open a six-point lead just before the half, however, the Tigers answered with basket by Bridgewater in the lane and a raining trey by Courtney Trask as time ran out to cut the lead to 33-32 going into the lockerroom.

To open the second half, LSU made 4-of-5 shots including a three-pointer by Temple, a layup by Bright, a baby hook by Bridgewater and a dunk by Temple on a fast break to take a 41-40 lead.

A trey by Jones, his third, put Global up by a pair before Lloreda earned a finger rolled layup in traffic to tie the game at 43-43.

After a three-pointer by Global Sports, LSU went on a 9-3 run capped by a pair of free throws by Dupree with just more than 13 minutes to play to take a 52-49 lead.

LSU would increase its lead to four, 58-54, before Global responded with a 22-4 run after the 12 minute media timeout to recapture and expand the lead, 76-62, with two mintues to play. During the run, LSU was 1-of-15 from the field with five turnovers.

Lloreda broke the 7:44 drought with a layup at the 1:36 mark, but it was too little too late for the Tigers.