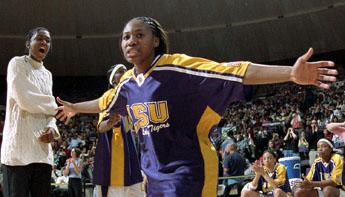 LSU enters the game with the highest national ranking since 1977-78 and was also picked by the media to finish second in the Southeastern Conference.

“We hope to see some good things in this game,” LSU head coach Sue Gunter said. “Exhibition games give us a good chance to see what our players can do against someone else in a game-like situation.”

Freshmen Seimone Augustus and Treynell Clavelle and sophomore Florence Williams will all make their debut with the Lady Tigers on Friday night.

Augustus, a Baton Rouge native, was the National High School Player of the Year in 2002, while Williams had to sit out last season as a partical qualifier.

After Friday’s game, the Lady Tigers will finish the exhibition schedule by hosting the Houston Jaguars on Thursday at 7 p.m. in the PMAC.