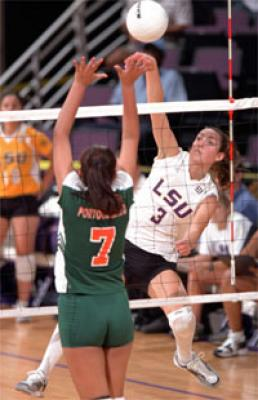 BATON ROUGE — The LSU volleyball team travels to Starkville, Miss., to take on Mississippi State on Friday at 7 p.m., the first match of a four-match Southeastern Conference road trip to close out the regular season.

The Tigers (15-8, 7-5 SEC) are looking to bounce back from a 3-1 loss to Kentucky on Tuesday in their home finale. The loss snapped LSU’s five-match SEC winning streak, the longest conference winning streak for the Tigers since 1991.

Mississippi State (10-16, 1-11 SEC) has dropped its last nine straight SEC matches and has lost 14-straight conference games. The Bulldogs defeated Auburn, 3-0, in their only league victory on Oct. 4.

“We really need to go out and play tough against Mississippi State,” said LSU head coach Fran Flory. “We can not afford a letdown this late in the season, especially since we play our last four matches on the road.

“I thought we fought hard to come back against them in the second game when we beat them two weeks ago. We will need that same fight and determination at their place this weekend.”

Tiger Blaise DeRouen served for seven straight points as the Tigers roared back to tie the game at 29. The Bulldogs scored the next point to serve for the game once again, but a kill Lancon held off game point. Lancon’s next kill gave LSU its first game point and the Tigers converted as MSU’s Nicole Broome hit the ball out of bounds on an attack attempt to give LSU the game.

The momentum of the second game carried over into the third game for the Tigers. After being tied at 16, LSU went on a 14-3 run to close out the match, which ended on a service error by the Bulldogs.

After the Mississippi State match, LSU will travel to take on Ole Miss in Oxford, Miss., on Sunday at 1:30 p.m. The Tigers swept the Lady Rebels in Baton Rouge two weeks ago.