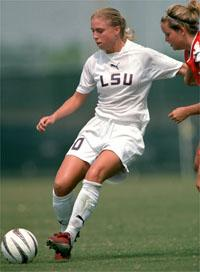 OXFORD, Miss. — The LSU soccer team became the first No. 8 seed to defeat a No. 1-seeded opponent in nine seasons of the Southeastern Conference tournament on Thursday as the Tigers knocked off Auburn, 1-0, at the Ole Miss Soccer Stadium here in Oxford, Miss.

The LSU soccer team advanced to the semifinal round of the 2002 SEC Tournament and will face No. 4-seeded Florida, which held off No. 5-seeded South Carolina, 2-1, on Friday at 5 p.m. here in Oxford, Miss. LSU and Florida, the six-time defending SEC Tournament Champion, played to a 1-1 draw on Oct. 11 in Gainesville. Florida holds a 4-0-1 all-time record against LSU, outscoring the Tigers 34-1 in the first four victories prior to 2002.

“It was an all-out team effort today,” said LSU head coach George Fotopoulos. “We are just a hard-working team and everyone gave 110 percent and played some of their best soccer. I’m very proud of the girls and we’ll enjoy this victory for about 10 minutes until we have to start preparing for whoever we play tomorrow.”

LSU’s Mandy Heintz secured the Tigers’ first postseason victory in school history with only 4:38 remaining in the contest as she controlled a perfect lead-in pass from Danielle Keath and placed a shot neatly into the bottom left corner of the goal. The Tigers’ game-winning goal proved to be Heintz’ ninth of the season and her 23rd score of the 2002 campaign.

Heintz, the Tigers’ junior from San Antonio, Texas, finished the regular season as the conference leader in both goals scored and total points. The Tigers’ forward was named to the All-SEC Second Team on Wednesday and entered postseason play with 22 goals and 48 points.

With the victory, LSU improved to 12-4-3 on the season and earned its first SEC Tournament win in eight seasons. The Tigers also recorded the second winningest season in school history with 12 wins and handed Auburn its first lost in nine games. The loss dropped Auburn to an overall record of 14-4-2.

“This result should not take anything away from Auburn,” Fotopoulos said. “They’re well deserving of being conference champions and they have a very talented team. They (Auburn) missed some really good scoring chances in the first half and I think that the momentum of the match shifted when they missed the penalty kick. When we went into the half tied at 0-0, I knew that it was playing out how we wanted.”

At the 12:48 mark in the first half, LSU dodged an early bullet as Auburn’s Erin Hinson missed a penalty kick that would have given the War Eagles a 1-0 edge. The penalty kick was awarded after LSU freshman Tara Mitnick was called for a foul in the box on Auburn’s Christina Culver. On the penalty kick, Hinson rifled a shot at goaltender Robyn DesOrmeaux that sailed over the crossbar.

The teams played to a scoreless first-half tie on Thursday, as both goalkeepers turned in outstanding performances in the opening 45 minutes of play.

DesOrmeaux, LSU’s sophomore keeper from Carencro, La., recorded four crucial saves during the first half of play against Auburn’s potent offensive charge led by the SEC Player of the Year Sarah Steinmann. With only 2:30 remaining in the opening half, Steinmann evaded a Tiger defender and fired a wide open shot from the left flank that DesOrmeaux stopped with a diving save.

“The biggest difference in the game today was our goalkeeping,” said Fotopoulos. “I mean, Robyn DesOrmeaux played an outstanding game today and stopped two crucial one-on-one opportunities from Steinmann. She did a great job in the first half and then added some All-America type saves in the second half. I have to give a lot of credit to her.”

The Tigers’ goalkeeper then proceeded to make the defensive play of the first half as Steinmann gathered the rebound and blasted another shot at LSU’s goal. With Auburn seemingly going to take a 1-0 lead, DesOrmeaux positioned herself in the net and dove lengthwise to her left for a second-consecutive save.

“Today was one of my best games and I just wanted to redeem myself for how I played against Auburn the first time,” said DesOrmeaux. “I had something to prove out there today and coach said that this game would be won by emotion and our defense came out with some great intensity in the second half. We knew that our offense would pull it out in the end.”