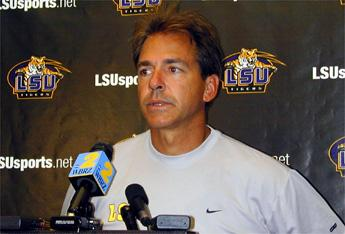 BATON ROUGE — LSU continued to prepare for Saturday’s contest against Kentucky with a two-hour workout here Wednesday at the Charles McClendon Practice Facility.

LSU, ranked No. 14 in the nation, will carry a 6-2 overall mark and a 3-1 Southeastern Conference record into Saturday’s contest. LSU hasn’t played since a 31-7 setback to Auburn two weeks ago. LSU was open last Saturday.

Kentucky has won two of its last three and stands at 6-3 overall and 2-3 in league play. The Wildcats are coming off a 45-24 win over Mississippi State last week. Last year, the Tigers rallied for a 29-25 last-minute when over the Wildcats in Lexington.

“I think we are getting to the point where we are ready to play a game,” LSU coach Nick Saban said after Wednesday’s workout. “I think the players are tired of practicing, which sometimes happens when you have a bye week, even though we only practiced twice last week. We are pleased with most guys getting back to being healthy, both Hook (Demetrius Hookfin) and Marcus Spears have practiced for a couple of days and seem to be getting a lot better.”

Cornerback Hookfin injured his ankle against Auburn, while Spears missed the Auburn contest after suffering an ankle sprain in LSU’s 38-14 win over South Carolina.

Saban said one of the keys to Saturday’s contest is playing a full 60-minutes in the game as well as being physical on both sides of the football.

“We are playing a good team and we are playing on the road so this is going to be a big challenge,” Saban said. “They do a lot of things well so I think it is going to take 60 minutes of ball on our part. We are going have to be more physical than they are.”

The Tigers will practice again on Thursday followed by a walk-thru in Tiger Stadium on Friday. LSU will depart for Lexington on Friday afternoon. Kickoff for Saturday’s contest is set for 11:30 a.m. (CT) at Commonwealth Stadium.