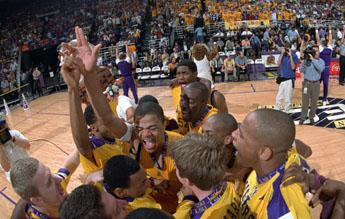 BATON ROUGE — After five days short of a month of practices, the LSU men’s basketball team will face outside competition for the first time Thursday night when they take on the Global Sports All-Stars in an exhibition game at 7 p.m. in the Maravich Assembly Center.

Tickets are available during the day at the LSU Athletic Ticket Office and at the new ticket windows at the Assembly Center beginning 90 minutes prior to tip-off on the upper concourse of the building.

Tickets for the contest are $5 and students with valid LSU student cards get in free. There will be no radio or television for the contest but live stats of the contest will be available on the Internet at www.LSUsports.net.

The Tigers are 44-10 in exhibition contests dating back to 1952 and 9-1 under John Brady in his first five years. This is the third straight season the Tigers have played the group of former college all-stars under the Global Sports banner. The Tigers won, 72-69, in 2000 and last year, 78-71.

LSU Coach John Brady said he would look at a lot of different combinations in the contest regardless of the time and score situation. The Tigers will still have one more exhibition game on Nov. 15 before opening the regular season at home on Nov. 22 in the Hispanic College Funds Classic event against Nicholls State.

It is expected to be a somewhat familiar starting lineup for LSU as the Tigers return five guys who had a majority of starts last year: Torris Bright, Collis Temple III, Ronald Dupree, Brad Bridgewater and Antonio Hudson. Four of those five should start along with junior college transfer and last year’s national JC Player of the year (6-9) Jaime Lloreda of Panama.

“I’d like to start all six of them because that would be a significant advantage,” said Brady. “But the rules won’t allow it.

“We are going to try to play a number of guys and see who can and who can’t,” said Brady of his 18-man squad. “There will be some guys who think they should play hurt and might get their feelings hurt, but that’s just the way it is. We’ll give some people some opportunities to see what they can do. Sometimes when the opportunity calls you only have three or four minutes to show it. You need to be ready to go. I’m going to try to play the five toughest guys we have because I toughness will carry you a long way.”

The Tigers will be at near full-speed for the contest, probably missing just Mildon Ambres, who sprained his right ankle on Tuesday at practice. Brad Bridgewater sprained his right thumb in Tuesday’s practice, but worked out Wednesday at full speed.