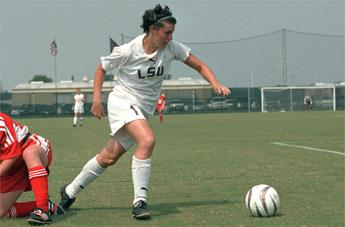 OXFORD, Miss. — The LSU soccer team will make its first postseason appearance in over two years on Thursday as the Tigers challenge top-seeded Auburn in the opening game of the 2002 Southeastern Conference at 11:30 a.m. here in Oxford, Miss.

“We’ve already reached two of our goals this season and now its time to try and achieve our third,” said LSU head coach George Fotopoulos. “Our first goal was to have a winning season, our second was to qualify for the SEC Tournament, and now our third is to earn an at-large berth in the NCAA’s, so we need to pick up a couple more big wins.”

LSU finished the regular season with an overall record of 11-4-3 and a 2-3-3 mark against SEC opponents. The Tigers ended conference play as the third place team in the Western Division and earned the No. 8 seed in this week’s SEC Tournament being held at the Ole Miss Soccer Stadium.

The Tigers notched a vital 1-1 draw against the Arkansas Lady’Backs on Sunday to receive the conference’s final bid to the tournament. In the final SEC contest of the regular season, LSU needed either a win or a tie to beat out Arkansas for the tournament’s No. 8 seed.

Each season, the top-eight teams in the SEC, regardless of division, compete in a four-day, single-elimination tournament that culminates the season’s conference play. LSU has qualified for the prestigious postseason tournament four times in its eight years of existence including two times in the last three seasons.

“We have a really young team and this is going to be a new experience for a lot of them,” Fotopoulos said. “A majority of our players haven’t played in an SEC Tournament, but both of our captains have, as well as a lot of our other leaders, so they will have a positive affect on them. We’ve also played Auburn once this season and it won’t be anything new for us.”

LSU and Auburn met during the regular season in a Western Division matchup at the LSU Soccer Complex on Oct. 20. In the annual contest, LSU fought back from an early 3-0 first-half deficit, but eventually lost 3-2. With the win, Auburn increased its advantage in the overall series record to 5-3.

“Auburn is an extremely talented and well-coached team,” said Fotopoulos. “They are definitely the best team in the conference and probably one of the top teams in the nation. They will be a challenge for us, but I sincerely believe that we can beat any team in this conference when we are playing our best soccer. We have some players back from injuries and hopefully we won’t make as many first-half errors this time.”

The LSU soccer team will look to record its first SEC Tournament victory in school history on Thursday as the Tigers challenge top-seeded Auburn at 11:30 a.m. at the Ole Miss Soccer Stadium here in Oxford, Miss.