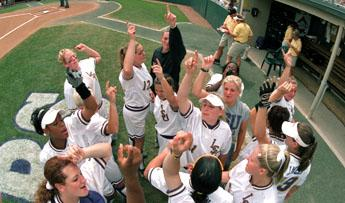 BATON ROUGE — The 2002 Southeastern Conference Champion Tiger softball team finished ranked No. 3 in the nation in the Ratings Percentage Index (RPI) poll compiled by the NCAA, while the SEC was ranked the third best conference in the nation.

As a league, the 11-team SEC ranked third among conferences nationally behind the always dominant eight-team Pac-10 Conference and the ACC, which has only five participating softball teams.

LSU finished the year with a 56-11 record and won its fourth-consecutive conference title. The Tigers also became the first school in SEC history to win back-to-back conference tournament championships, advancing to the NCAA Tournament for the fifth-straight year.

LSU traveled to the NCAA Regionals in Lafayette, La., as a No. 1 seed in Region 3, but lost out to Arizona State on the final day of competition

Seniors Britni Sneed and Trena Peel were both named All-Americans for the Tigers, while earning SEC Pitcher and Athlete of the Year honors respectively. Head Coach Yvette Girouard was also named the SEC tri-Coach of the Year and Louisiana Coach of the Year.

Boasting the nation’s fifth-best recruiting class, the Tigers will open play at home in the Tiger Classic on Feb. 7 against Stephen F. Austin at 2 p.m. LSU will also face Baylor and DePaul as part of the three-day tournament.