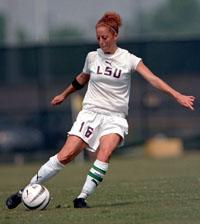 BATON ROUGE — The LSU soccer team earned its second Southeastern Conference Tournament berth in three years on Sunday as the Tigers fought to a 1-1 draw against the Arkansas Lady ‘Backs at the LSU Soccer Complex.

With the tie, LSU secured the No. 8 seed in the prestigious postseason tournament and will play top-seeded Auburn on Thursday, Nov. 7, at the Ole Miss Soccer Stadium in Oxford, Miss. The start times for the first round of play have yet to be determined by the SEC Tournament officials.

“This team really deserves to go (to the SEC Tournament),” said LSU head coach George Fotopoulos. “I believe that we are one of the top teams in the SEC and Arkansas played us really tough today. I’m extremely proud of how our kids played hard and how they always find a way. I mean, those ties against both Florida and Vanderbilt proved to be huge for us this season.”

LSU (11-4-3, 2-3-3 SEC) held off an explosive Arkansas offense on Sunday and earned the program’s fourth postseason berth in eight seasons. In Fotopoulos’ inaugural season at the helm, the Tigers’ made their most recent appearance in the 2000 SEC Tournament and finished the season with a school-best 15-6 overall record.

The LSU soccer team concluded the regular season with its second-straight 1-1 draw and its third of SEC competition. Earlier this year, the Tigers also tied both Florida and Vanderbilt by a count of 1-1. LSU owns a total of eight ties in its eight years of existence.

“The greatest tie in the history of the school was today,” Fotopoulos said. “These kids deserve a lot of credit, because at the end of the game they didn’t have any legs left, but they continued to play hard and they made this happen. I have to take my hat off to my players for their performance today, especially the seniors.”

LSU’s four talented seniors: Mandy Heintz, Leigh McGovern, Ashley Mitnick and Melissa Shelton each turned in outstanding performances in their final outing at the LSU Soccer Complex on Sunday. McGovern and Shelton proved to be dominant forces on their respective ends of the field, while Heintz and Mitnick combined to record the defining moments of LSU’s 2002 season.

With the Tigers’ trailing 1-0, Heintz gathered a long pass, challenged three Lady ‘Back defenders in the box and fell victim to an Arkansas foul on her shot attempt. The foul in the box prompted a penalty kick at the 39:38 mark in the contest and Mitnick, LSU’s senior co-captain and penalty kick specialist, tied the crucial SEC finale with a shot past the keeper.

The goal proved to be Mitnick’s fourth of the season and the 20th of her illustrious four-year career. She has scored on each of her two penalty kick attempts this season.

“Ashley Mitnick’s penalty kick was clutch,” said Fotopoulos. “I told the girls before the game that this match was going to be decided on set pieces and it came to fruition. I liked the fact that we kept our composure all game long and Robyn DesOrmeaux and the defense did a lot better job today than they have in the past.”

Arkansas jumped out to an early 1-0 lead on Sunday with a goal scored by Megan McCool at the 16:40 mark in the first half. The goal was her fourth of the season and was assisted by sophomore Julie Williford.

The LSU soccer team will attempt to win the first SEC Tournament match of its eight-year existence on Thursday as the Tigers challenge top-seeded Auburn at the Ole Miss Soccer Stadium in Oxford, Miss. The time has yet to be determined.