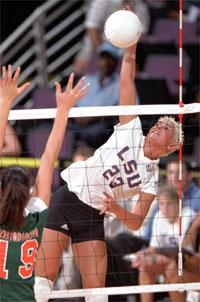 BATON ROUGE — For the first time this season, the LSU volleyball team lost the first game and battled back to win, defeating Alabama in a crucial Southeastern Conference Western Division match, 30-32, 30-26, 30-23, 30-28, on Sunday afternoon in the Pete Maravich Assembly Center.

With the Tigers’ fifth-straight win and a loss by Ole Miss, LSU (15-7, 7-4 SEC) is guaranteed one of eight spots in the SEC Tournament at the end of the month in Fayetteville, Ark. The Tigers also move a game and a half ahead of Alabama, which falls to 16-11 overall and 6-6 in conference play.

“This was a big win for this team,” said LSU head coach Fran Flory. “This will go a long way for us in the SEC standings. It was a tough loss for us when we went to Tuscaloosa, so it was great for us to come away with the win at home.

“We did not give up when we got behind after losing the first game. It showed the determination of this team that we fought back for the win.”

Prior to the start of the match, the Tigers honored their five seniors for “Senior Day”. Lauren Cuyler, Jenny Greco, Jennifer Hampton, Katie Kubena and Rachel Vogt were each presented before the match.

“It is great that our seniors could come away with this win on ‘Senior Day’,” said Flory. “They really stepped up their play and were determined to win.”

Hampton led the Tigers with 25 kills and 11 digs, her 14th double-double of the season. The senior also recorded a .444 hitting percentage with two service aces and two blocks.

In the first game, neither team made many mistakes, as both LSU and Alabama hit at over a .400 clip. Alabama jumped out to the first lead 9-12, before the Tigers fought back to tie the game at 18. The match was tied 11 more times before the Crimson Tide took the win on a kill by Erin Heffner, 32-30.

LSU jumped out early in the second game, 3-0, but Alabama responded immediately to tie the game at five. The Tigers retook the lead for good, leading by as many as seven points, 20-13, before a block by Causey and Vogt gave LSU the win, 30-26.

The third game began much like the first, with neither team taking the early lead. LSU used a 5-0 run to break a 14-14 tie to five the Tigers the first substantial lead of the game.

After Alabama cut the deficit to two points, 21-19, the Tide would get no closer. LSU put the game away on a 6-1 run with a service ace by Hampton to take the 2-1 lead.

The game would be tied six more times before LSU would take the lead for good, 23-22, as the Tigers held off the Crimson Tide the rest of the way. LSU finally put the match away on a kill by Hampton.

The Tigers will close out the home schedule against Kentucky on Tuesday at 6 p.m. in the PMAC. The match was originally scheduled for Oct. 4, but had to be rescheduled due to Hurricane Lili.